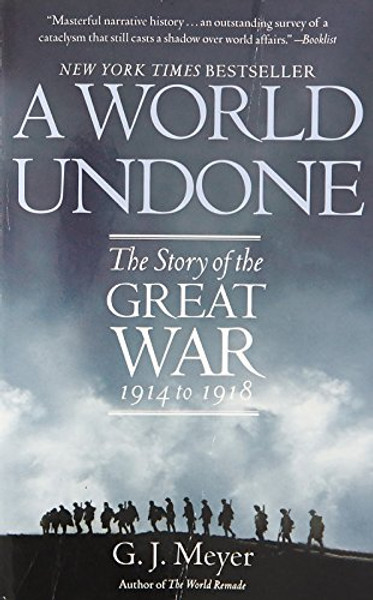 Drawing on exhaustive research, this remarkable, intimate account tells the story of how World War I reduced Europes mightiest empires to rubble, killed twenty million people, and cracked the foundations of the world we live in today.

On a summer day in 1914, a nineteen-year-old Serbian nationalist gunned down Archduke Franz Ferdinand in Sarajevo. While the world slumbered, monumental forces were shaken. In less than a month, a combination of ambition, deceit, fear, jealousy, missed opportunities, and miscalculation sent Austro-Hungarian troops marching into Serbia, German troops streaming toward Paris, and a vast Russian army into war, with England as its ally. As crowds cheered their armies on, no one could guess what lay ahead in the First World War: four long years of slaughter, physical and moral exhaustion, and the near collapse of a civilization that until 1914 had dominated the globe.

Praise for A World Undone

Thundering, magnificent . . . [A World Undone] is a book of true greatness that prompts moments of sheer joy and pleasure. . . . It will earn generations of admirers.The Washington Times

Meyers sketches of the British Cabinet, the Russian Empire, the aging Austro-Hungarian Empire . . . are lifelike and plausible. His account of the tragic folly of Gallipoli is masterful. . . . [A World Undone] has an instructive value that can scarcely be measuredLos Angeles Times

An original and very readable account of one of the most significant and often misunderstood events of the last century.Steve Gillon, resident historian, The History Channel

I Never Had It Made: An Autobiography of Jackie Robinson

Sweet Sleep: Nighttime and Naptime Strategies for the Breastfeeding Family

The Civil War: The Definitive Reference Including a Chronology of Events, and Encyclopedia, and the memoirs of Grant and Lee

The Louvre: All the Paintings