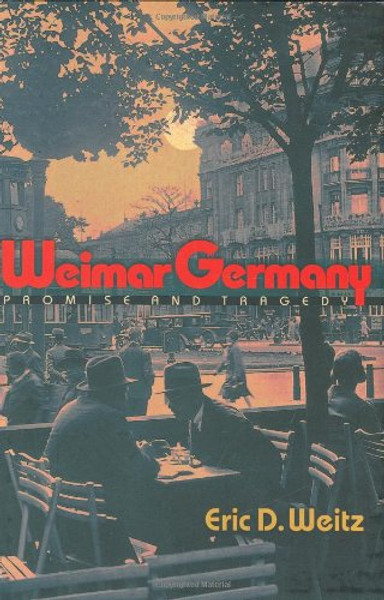 Weimar Germany still fascinates us, and now this complex and remarkably creative period and place has the history it deserves. Eric Weitz's Weimar Germany reveals the Weimar era as a time of strikingly progressive achievements--and even greater promise. With a rich thematic narrative and detailed portraits of some of Weimar's greatest figures, this comprehensive history recaptures the excitement and drama as it unfolded, viewing Weimar in its own right--and not as a mere prelude to the Nazi era.

Weimar Germany tells how Germans rose from the defeat of World War I and the turbulence of revolution to forge democratic institutions and make Berlin a world capital of avant-garde art. Setting the stage for this story, Weitz takes the reader on a walking tour of Berlin to see and feel what life was like there in the 1920s, when modernity and the modern city--with its bright lights, cinemas, new women, cabarets, and sleek department stores--were new. We learn how Germans enjoyed better working conditions and new social benefits and listened to the utopian prophets of everything from radical socialism to communal housing to nudism. Weimar Germany also explores the period's revolutionary cultural creativity, from the new architecture of Erich Mendelsohn, Bruno Taut, and Walter Gropius to Hannah Hch's photomontages and Bertolt Brecht and Kurt Weill's theater. Other chapters assess the period's turbulent politics and economy, and the recipes for fulfilling sex lives propounded by new sexologists. Yet Weimar Germany also shows how entrenched elites continually challenged Weimar's achievements and ultimately joined with a new radical Right led by the Nazis to form a coalition that destroyed the republic.

Thoroughly up-to-date, skillfully written, and strikingly illustrated, Weimar Germany brings to life as never before an era of creativity unmatched in the twentieth century-one whose influence and inspiration we still feel today.

When Money Dies: The Nightmare of Deficit Spending, Devaluation, and Hyperinflation in Weimar Germany

A Promise is Promise (Munsch for Kids)