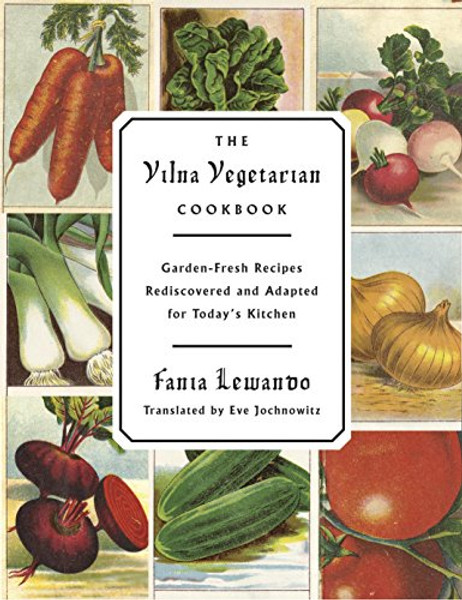 Beautifully translated for a new generation of devotees of delicious and healthy eating: a groundbreaking, mouthwatering vegetarian cookbook originally published in Yiddish in preWorld War II Vilna and miraculously rediscovered more than half a century later.

In 1938, Fania Lewando, the proprietor of a popular vegetarian restaurant in Vilna, Lithuania, published a Yiddish vegetarian cookbook unlike any that had come before. Its 400 recipes ranged from traditional Jewish dishes (kugel, blintzes, fruit compote, borscht) to vegetarian versions of Jewish holiday staples (cholent, kishke, schnitzel) to appetizers, soups, main courses, and desserts that introduced vegetables and fruits that had not traditionally been part of the repertoire of the Jewish homemaker (Chickpea Cutlets, Jerusalem Artichoke Soup; Leek Frittata; Apple Charlotte with Whole Wheat Breadcrumbs). Also included were impassioned essays by Lewando and by a physician about the benefits of vegetarianism. Accompanying the recipes were lush full-color drawings of vegetables and fruit that had originally appeared on bilingual (Yiddish and English) seed packets. Lewando's cookbook was sold throughout Europe.

Lewando and her husband died during World War II, and it was assumed that all but a few family-owned and archival copies of her cookbook vanished along with most of European Jewry. But in 1995 a couple attending an antiquarian book fair in England came upon a copy of Lewando's cookbook. Recognizing its historical value, they purchased it and donated it to the YIVO Institute for Jewish Research in New York City, the premier repository for books and artifacts relating to prewar European Jewry. Enchanted by the book's contents and by its backstory, YIVO commissioned a translation of the book that will make Lewando's charming, delicious, and practical recipes available to an audience beyond the wildest dreams of the visionary woman who created them.

With a foreword by Joan Nathan.Full-color illustrations throughout.
Translated from the Yiddish by Eve Jochnowitz.

Fresh from a Vegetarian Kitchen: 450 Delicious Recipes and 75 minues for everyday festive and ethnic vegetarian meals--all low in fat and free of cholesterol, eggs and dairy

The French Market Cookbook: Vegetarian Recipes from My Parisian Kitchen