The Shattering of the Union: America in the 1850s (The American Crisis Series: Books on the Civil War Era) 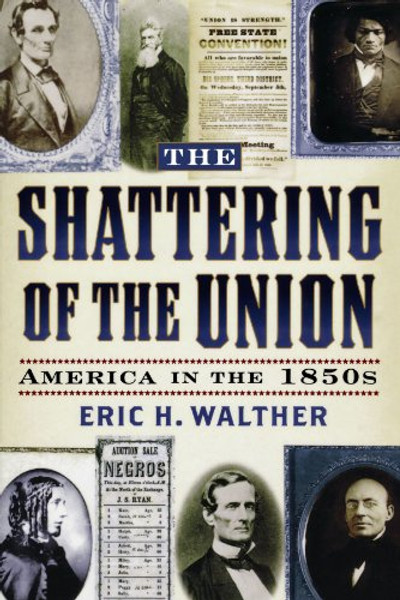 The Shattering of the Union: America in the 1850s (The American Crisis Series: Books on the Civil War Era)

The 1850s offered the last remotely feasible chance for the United States to steer clear of Civil War. Yet fundamental differences between North and South about slavery and the meaning of freedom caused political conflicts to erupt again and again throughout the decade as the country lurched toward secession and war.

With their grudging acceptance of the Compromise of 1850 and the election of Franklin Pierce as president in 1852, most Americans hoped that sectional strife and political upheaval had come to an end. Extremists in both North and South, abolitionists and secessionists, testified to the prevailing air of complacency by their shared frustration over having failed to bring on some sort of conflict. Both sets of zealots wondered what it would take to convince the masses that the other side still menaced their respective visions of liberty. And, as new divisive issues emerged in national politics-with slavery still standing as the major obstacle-compromise seemed more elusive than ever.

As the decade progressed, battle lines hardened. The North grew more hostile to slavery while the South seized every opportunity to spread it. Immigrant Aid Societies flourished in the North, raising money, men, and military supplies to secure a free soil majority in Kansas. Southerners flocked to the territory in an effort to fight off antislavery. After his stirring vilification of the institution of slavery, Massachusetts senator Charles Sumner was brutally attacked on the floor of the United States Senate. Congress, whose function was to peacefully resolve disputes, became an armed camp, with men in both houses and from both sections arming themselves within the capitol building. In October 1858, Senator William Henry Seward said that the nation was headed for an irrepressible conflict. In spite of the progress ushered in by the decade's enormous economic growth, the country was self destructing.

The Shattering of the Union: America in the 1850s is a concise, readable analysis and survey of t

The Union is Dissolved!: Charleston and Fort Sumter in the Civil War (Civil War Series)

Wars within a War: Controversy and Conflict over the American Civil War (Civil War America)

Beneath a Northern Sky: A Short History of the Gettysburg Campaign (The American Crisis Series: Books on the Civil War Era)

Brave: 50 Everyday Acts of Courage to Thrive in Work, Love and Life

The Celluloid Closet: Homosexuality in the Movies