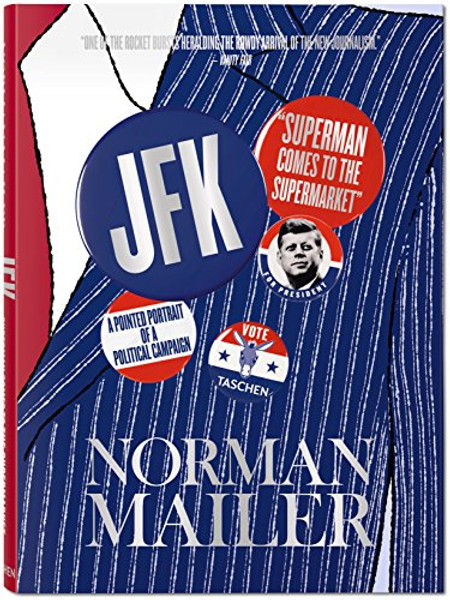 A time for greatness


With his Hollywood good looks, boundless enthusiasm, and mesmeric media presence, John F. Kennedy was destined to capture the imaginations of the more than 70 million Americans who watched the nations first televised presidential debate. Just days after beating out Richard Nixon by the narrowest margin in history, Kennedy himself said, It was the TV more than anything else that turned the tide.

But one man begged to differ: writer Norman Mailer, who bragged that his pro-Kennedy treatise, Superman Comes to the Supermarket, had won the election for Kennedy. Whether or not that was the case, the article, published in Esquire magazine just weeks before polls opened, did redefine political reporting and New Journalism with Mailer's frank, first-person voice identifying Kennedy as the existential hero who could awaken the nation from its postwar slumber and conformist Eisenhower years.

Now, TASCHEN reimagines this no-holds-barred portrait of one of Americas most revered presidents on his path to the White House, publishing Mailers essay in book form with over 300 photographs that bring the campaign and the candidates family to life. These images were captured by some of the great photojournalists of the dayCornell Capa, Jacques Lowe, Paul Schutzer, Stanley Tretick, Hank Walkerand appear in this volume alongside many never-before-published photos by Garry Winogrand and Burton Berinsky, providing a fascinating look at the man who declared the 60s a time for greatness.

JFK in the Senate: Pathway to the Presidency

JFK Has Been Shot

The Color of Welfare: How Racism Undermined the War on Poverty

A Guide to the Artifacts of Colonial America

The Birthday Book: Celebrations for Everyone (Crafts, Festivals and Family Activities Series)