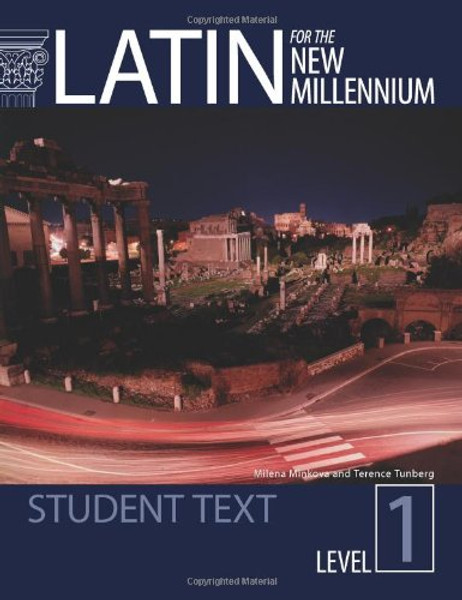 Latin For The New Millennium Series

This new two-year comprehensive introductory Latin series is designed with both high school and college students in mind. The curriculum is complete with student texts, student workbooks, teacher's manuals, ancillaries on Roman history and mythology, and complemented by a website, test bank and generator, and student internet activities.

Written by world-renowned Latinists, Milena Minkova and Terence Tunberg, and drawing on the authors specialty, this series features an oral activity in each chapter. Under the supervision of Editors LeaAnn Osburn and Elisa Denja, Latin for the New Millennium has been carefully vetted by seasoned teachers and a team of teachers who piloted the curriculum.

The fusion approach to Latin is built into both levels, combining the best practices of the reading method and the traditional grammar approach with a cumulative vocabulary foundation that will ensure a smooth transition to upper-level literature courses.

Each chapter presents vocabulary found in the works of ancient Latin authors studied in both college and Advanced Placement courses. Exercises designed for oral use accompany a set of plentiful traditional exercises in each chapter. The Latin readings drawn from original Latin works span the ages from early Rome through the medieval and Renaissance periods, demonstrating the vitality and universality of the Latin literary tradition. The readings, illustrations, and inserts on Roman literature, history, mythology, and daily life seamlessly present the connection between the Latin language and its culture. Essays written by university scholars probe the connections between Roman culture and the modern world. To promote an enriched English vocabulary, each chapter features sections on derivatives, the influence of Latin vocabulary on English, and selected proverbs or common Latin sayings.

The Latin for the New Millennium website will feature a student section, a teachers-only section, the Teachers Lounge for sharing materials, networking with other teachers, posting student work, accessing a test generator.

For over 30 years Bolchazy-Carducci Publishers has produced the highest quality Latin and ancient Greek books. From Dr. Seuss books in Latin to Plato's Apology, Bolchazy-Carducci's titles help readers learn about ancient Rome and Greece; the Latin and ancient Greek languages are alive and well with titles like Cicero's De Amicitia and Kaegi's Greek Grammar. We also feature a line of contemporary eastern European and WWII books.

Some of the areas we publish in include:

Latin for the New Millennium: Level 2 (English and Latin Edition)