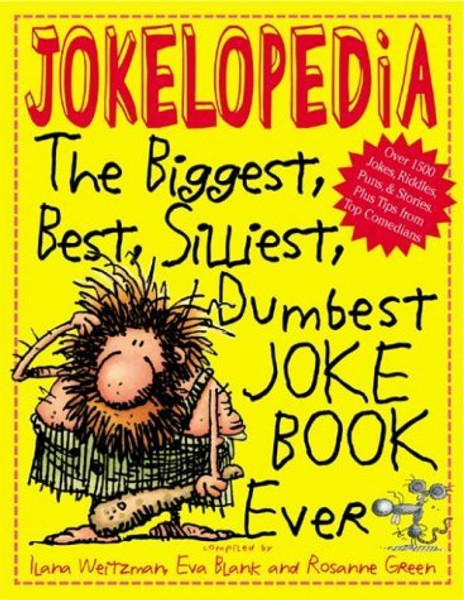 Take it away! Jokelopedia is the mother of all joke booksan all-encompassing, gut-busting collection of more than 1,700 jokes for every occasion. 59 elephant jokes, including Why are elephants banned from public swimming pools They always drop their trunks. Dozens of knock-knock jokes, like Knock, knock./ Who's there?/Raven./Raven who?/Raven lunatic who wants to knock your door down!

Plus teacher jokes, food jokes, gross jokes, and why-did-the-chicken-cross-the-road jokes. And a whole section of tongue twisters, specializing in the yucky. Try saying sneaking in my creaky squeaky reeking sneakers. but the jokes are just the beginning Jokelopedia is loaded with joke-telling tips and profiles of famously funny people, from Will Ferrell to SpongeBob SquarePants (Hey, waitis SpongeBob really a person?)Packed with 1,700 kid-friendly jokes, tongue-twisters, riddles, and puns, this new edition of JOKELOPEDIA is the bible for incurable jokesters, class clowns, and aspiring comedians. Here are doctor jokes, robber jokes, teacher jokes, why-did-the-chicken-cross-the-road jokes. Lightbulb jokes, movie star jokes, gross-out jokes, vampire jokes, elephant jokes. The classics, fresh variations on the classics, and jokes with nothing classic about them. The guffaws are organized into categories for easy reference, and the book is sprinkled throughout with amusing facts, joke-telling pointers and tips, and informational spotlights on favorite funny people, including Mike Myers, Will Ferrell, and SpongeBob SquarePants.

Did you hear about the two antennae that met on a rooftop, fell in love, and got married?
The wedding wasnt much, but the reception was amazing!

What kind of books do skunks read?
Best-smellers.

Biggest and Best Storybook Ever

The Dumbest Idea Ever!

The Biggest Ever Tim Vine Joke Book: Over 1000 Puntastic Gags

The Funniest Football Joke Book Ever!