Home before Morning: The Story of an Army Nurse in Vietnam 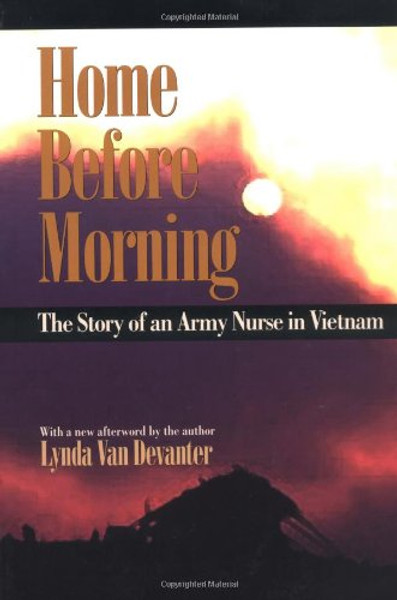 Home before Morning: The Story of an Army Nurse in Vietnam

Lynda Van Devanter was the girl next door, the cheerleader who went to Catholic schools, enjoyed sports, and got along well with her four sisters and parents. After high school she attended nursing school and then did something that would shatter her secure world for the rest of her life: in 1969, she joined the army and was shipped to Vietnam. When she arrived in Vietnam her idealistic view of the war vanished quickly. She worked long and arduous hours in cramped, ill-equipped, understaffed operating rooms. She saw friends die. Witnessing a war close-up, operating on soldiers and civilians whose injuries were catastrophic, she found the very foundations of her thinking changing daily.

After one traumatic year, she came home, a Vietnam veteran. Coming home was nearly as devastating as the time she spent in Asia. Nothing was the same including Lynda herself. Viewed by many as a murderer instead of a healer, she felt isolated and angry. The anger turned to depression; like many other Vietnam veterans she suffered from delayed stress syndrome. Working in hospitals brought back chilling scenes of hopelessly wounded soldiers. A marriage ended in divorce. The war that was fought physically halfway around the world had become a personal, internal battle.

Home before Morning is the story of a woman whose courage, stamina, and personal history make this a compelling autobiography. It is also the saga of others who went to war to aid the wounded and came back wounded physically and emotionally themselves. And, it is the true story of one person's triumphs: her understanding of, and coming to terms with, her destiny.

Women at War: The Story of Fifty Military Nurses Who Served in Vietnam (Studies in Health, Illness, and Caregiving)

The Army and Vietnam

One Day in Vietnam: The True Story of an Army Bird Dog Pilot

Careers in Criminal Justice and Related Fields: From Internship to Promotion

Encyclopedia of Hair: A Cultural History