Reform or Revolution and Other Writings (Dover Books on History, Political and Social Science) 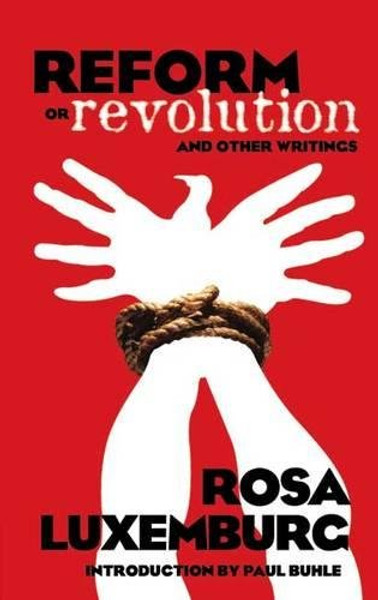 Reform or Revolution and Other Writings (Dover Books on History, Political and Social Science)

A polemic writing by the famous Red Rosa Luxemburg, Reform or Revolution (1899) explains why capitalism can never overcome its internal contradictions. An effective refutation of revisionist interpretations of Marxist doctrine, it defines the position of scientific socialism on the issues of social reforms, the state, democracy, and the character of the proletarian revolution.
Reform or Revolution opposes Edward Bernstein's revisionist theories, which rejected Marxism in favor of trade unionism and parliamentary procedures. Luxemburg offers articulate and reasoned objections to all of Bernstein's arguments. She defends the necessity for socialism, which provides an answer to the contradictions and inevitable crisis of the capitalist economy, along with a means for a transformation in working class consciousness. This essay remains a key explanation of why there can be no parliamentary road to socialism. It appears here together with Luxemburg's writings on Leninism or Marxism, The Mass Strike, and The Russian Revolution.

Anarchism and Other Essays (Dover Books on History, Political and Social Science)

The Principles of History: And Other Writings in Philosophy of History

Beccaria: 'On Crimes and Punishments' and Other Writings (Cambridge Texts in the History of Political Thought)