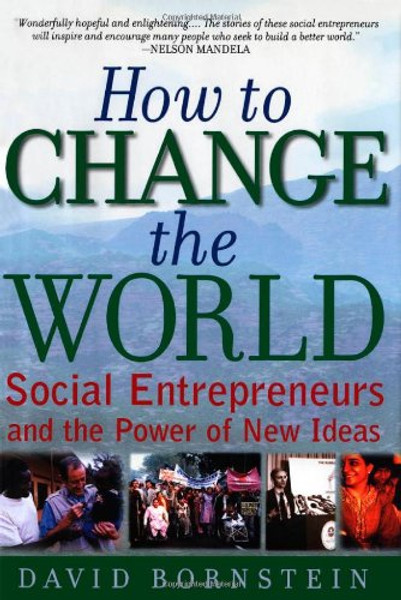 What business entrepreneurs are to the economy, social entrepreneurs are to social change. They are, writes David Bornstein, the driven, creative individuals who question the status quo, exploit new opportunities, refuse to give up--and remake the world for the better.
How to Change the World tells the fascinating stories of these remarkable individuals--many in the United States, others in countries from Brazil to Hungary--providing an In Search of Excellence for the nonprofit sector. In America, one man, J.B. Schramm, has helped thousands of low-income high school students get into college. In South Africa, one woman, Veronica Khosa, developed a home-based care model for AIDS patients that changed government health policy. In Brazil, Fabio Rosa helped bring electricity to hundreds of thousands of remote rural residents. Another American, James Grant, is credited with saving 25 million lives by leading and 'marketing' a global campaign for immunization. Yet another, Bill Drayton, created a pioneering foundation, Ashoka, that has funded and supported these social entrepreneurs and over a thousand like them, leveraging the power of their ideas across the globe.
These extraordinary stories highlight a massive transformation that is going largely unreported by the media: Around the world, the fastest-growing segment of society is the nonprofit sector, as millions of ordinary people--social entrepreneurs--are increasingly stepping in to solve the problems where governments and bureaucracies have failed. How to Change the World shows, as its title suggests, that with determination and innovation, even a single person can make a surprising difference. For anyone seeking to make a positive mark on the world, this will be both an inspiring read and an invaluable handbook.

The Art of the Idea: And How It Can Change Your Life

Social Physics: How Good Ideas Spread - The Lessons from a New Science

London: After a Fashion

Charles Bronson: The 95 Films and the 156 Television Appearances

001: The Nature of Love: Plato to Luther

The Healing Power of the Drum