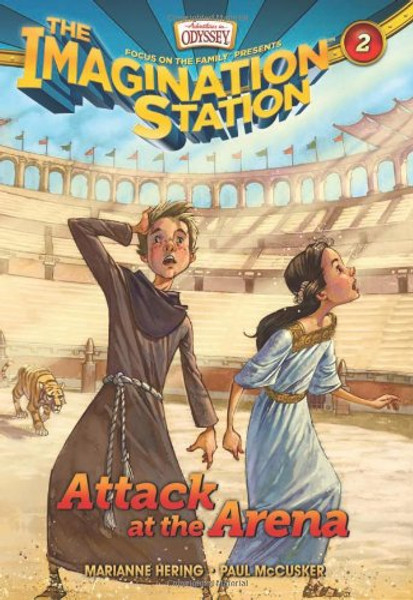 Patrick and Beth learn that Mr. Whittakers fancy ring can be seen inside the Imagination Station but not outside of the machine. A mysterious letter leads the cousins to fifth-century Rome in search of a special cup that belongs to a monk. If found, the cup could keep the mysterious Albert out of prison.
At the Roman Colosseum, Emperor Honorius is hosting a gladiator battle in celebration of a war victory. Beth attends the event as the emperors slave; Patrick attends as a monks apprentice but is taken prisoner and sent to fight in the arena. During their adventure, the cousins meet Telemachus (a true historical figure), a monk who believes that fighting is wrong. Telemachus is willing to risk everythingeven his lifeto stop the killing. When the cousins return with the cup, they find that a third letter has been sent with more information about Alberts fate.

Challenge on the Hill of Fire (AIO Imagination Station Books)