An American Betrayal: Cherokee Patriots and the Trail of Tears 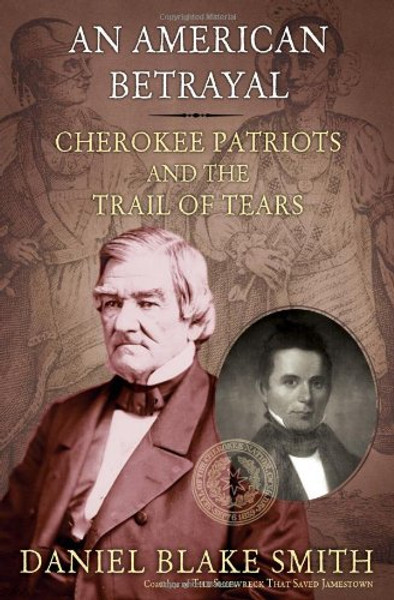 An American Betrayal: Cherokee Patriots and the Trail of Tears

Though the tragedy of the Trail of Tears is widely recognized today, the pervasive effects of the tribe's uprooting have never been examined in detail. Despite the Cherokees' efforts to assimilate with the dominant white culturerunning their own newspaper, ratifying a constitution based on that of the United Statesthey were never able to integrate fully with white men in the New World.

In An American Betrayal, Daniel Blake Smith's vivid prose brings to life a host of memorable characters: the veteran Indian-fighter Andrew Jackson, who adopted a young Indian boy into his home; Chief John Ross, only one-eighth Cherokee, who commanded the loyalty of most Cherokees because of his relentless effort to remain on their native soil; most dramatically, the dissenters in Cherokee countryespecially Elias Boudinot and John Ridge, gifted young men who were educated in a New England academy but whose marriages to local white girls erupted in racial epithets, effigy burnings, and the closing of the school.

Smith, an award-winning historian, offers an eye-opening view of why neither assimilation nor Cherokee independence could succeed in Jacksonian America.

Cherokee Legends and the Trail of Tears

Trail of Tears: The Rise and Fall of the Cherokee Nation

Patriotic Betrayal: The Inside Story of the CIAs Secret Campaign to Enroll American Students in the Crusade Against Communism