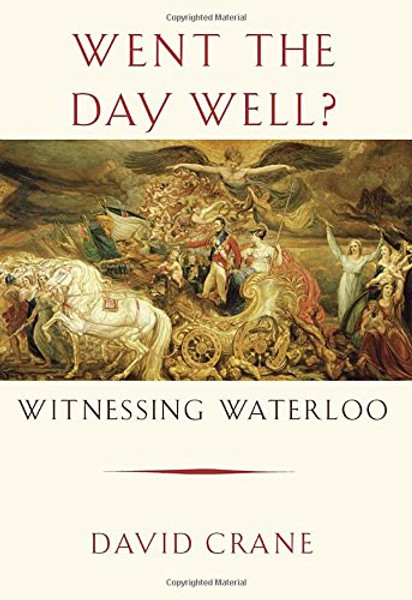 Midnight, Sunday, June 18, 1815. Britain holds its breath. Since Napoleons escape from Elba in February, Europe has been jolted from eleven months of peace back into the frenzied panic of a war it believed had ended. The whole complexion of the world is changed again, writes George Ticknor, then a young American lawyer in Britain for the first time. God only can forsee the consequences. The nation is awash in reports and rumors. The Battle of Waterloo is close at hand.

Went the Day Well? is an astonishing hour-by-hour chronicle that starts the day before the battle that reset the course of world history and continues to its aftermath. Switching perspectives between Britain and Belgium, prison and palace, poet and pauper, lover and betrothed, husband and wife, David Crane paints a picture of Britain as it was that summer when everything changed. Drawing on a wide range of primary sourcesfrom newspapers and journals to letters and poemsWent the Day Well? offers a highly original view of Waterloo, grand in scope but meticulous in detail.

What was Britain doing on that Sunday, from the mad king downward? Who were born to live out their lives in the Britain created at Waterloo? Who died? Who was preaching, who was writing and who was painting? Lyrically rendered in Cranes signature prose style, Went the Day Well? freeze-frames the men and women of Britain in 1815 as they went about their business, attended lectures, worked in fields and factoriesall on the cusp of a new, unforeseeable age.

Day the Animals Went on Strike