Treasures of the Thunder Dragon: A Portrait of Bhutan 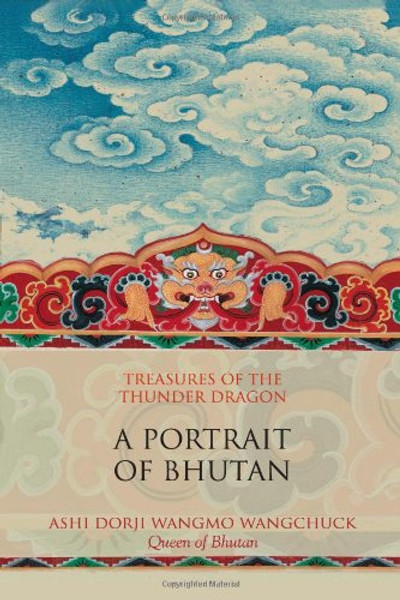 Treasures of the Thunder Dragon: A Portrait of Bhutan

Long regarded as the Forbidden Land, Bhutanor Druk Yul, the Land of the Thunder Dragonwas virtually closed to the outside world until the 1960s. Even today, little is known about this remote Himalayan Buddhist kingdom nestled between two giant neighbours, India and China. Often described as the Last Shangri La, Bhutan is still a country of pristine forests, alpine valleys and glacial lakes, rich in rare flora and fauna such as the blue poppy, the golden langur and the red panda. As spectacular as its natural beauty are the architecture of its towering dzongs (fortresses) and the art treasures that fill its monasteries and temples.

Ashi Dorji Wangmo Wangchucks portrait of her country is a captivating blend of personal memoir, history, folklore and travelogue. It provides unique and intimate insights into Bhutanese culture and society, with its vivid glimpses of life in Bhutans villages and hamlets, monasteries and palaces. Her engaging account of her childhood, growing up in a village in western Bhutan and the changes she witnessed when the country decided to end its isolation also tells a larger storythat of Bhutans rapid transition from a medieval kingdom to a modern nation within the space of a decade.

The author shares with us her delight in some of the hidden treasures of her country, which she discovered during her journeys on foot to every corner of Bhutanfrom highland villages in the shadow of the great Himalayan peaks to serene monasteries wreathed in myth and legend to the rainforests in the south and centre of the country, which are among the worlds richest biodiversity hotspots. This book, with its specially commissioned illustrations by young Bhutanese artists, and photographs from the authors family album, is essential reading both for those who plan to visit the Kingdom of the Thunder Dragon and for armchair travellers who yearn to experience the magic of Bhutan through their imaginations.

When China Ruled the Seas: The Treasure Fleet of the Dragon Throne, 1405-1433