This Terrible Sound: The Battle of Chickamauga (Civil War Trilogy) 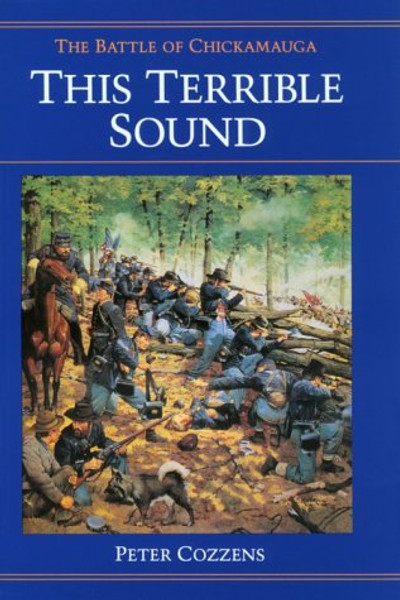 This Terrible Sound: The Battle of Chickamauga (Civil War Trilogy)

When North and South met among the desolate mountains of northwestern Georgia in 1863, they began one of the bloodiest and most decisive campaigns of the Civil War. The climactic Battle of Chickamauga lasted just two days, yet it was nearly as costly as Gettysburg, with casualties among the highest in the war.

In this study of the campaign, the first to appear in over thirty years and the most comprehensive account ever written on Chickamauga, Peter Cozzens presents a vivid narrative about an engagement that was crucial to the outcome of the war in the West. Drawing upon a wealth of previously untapped sources, Cozzens offers startling new interpretations that challenge the conventional wisdom on key moments of the battle, such as Rosecrans's fateful order to General Wood and Thomas's historic defense of Horseshoe Ridge.

Chickamauga was a battle of missed opportunities, stupendous tactical blunders, and savage fighting by the men in ranks. Cozzens writes movingly of both the heroism and suffering of the common soldiers and of the strengths and tragic flaws of their commanders. Enhanced by the detailed battle maps and original sketches by the noted artist Keith Rocco, this book will appeal to all Civil War enthusiasts and students of military history.

Battle Hymns: The Power and Popularity of Music in the Civil War (Civil War America)

Milliken's Bend: A Civil War Battle in History and Memory

The Last Full Measure: A Novel of the Civil War (Civil War Trilogy)

Decisive Battles of the Civil War

The President and the Parties: The Transformation of the American Party System since the New Deal

Kaffe Fassett at the V & A Knitting and Needlepoint.