The Trial of Galileo: Aristotelianism, the New Cosmology, and the Catholic Church, 1616-1633 (Reacting to the Past) 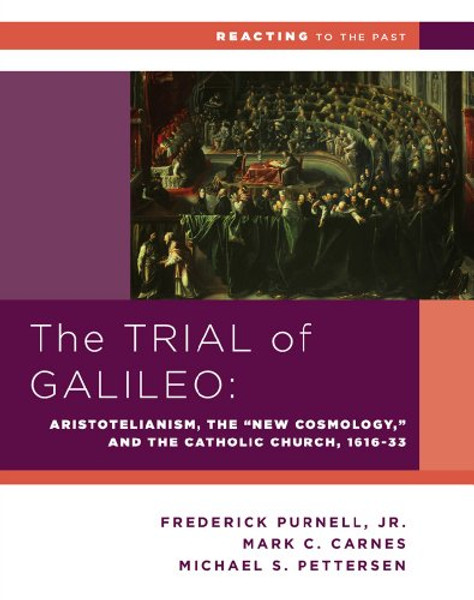 The Trial of Galileo: Aristotelianism, the New Cosmology, and the Catholic Church, 1616-1633 (Reacting to the Past)

Part of the Reacting to the Past series, The Trial of Galileo brings the Scientific Revolution to life by sparking debate on issues of science and religion.

In The Trial of Galileo the new science, as brilliantly propounded by Galileo Galilei, collides with the elegant cosmology of Aristotle, Aquinas, and medieval Scholasticism. The game is set in Rome in the early decades of the seventeenth century. Most of the debates occur within the Holy Office, the arm of the papacy that supervises the Roman Inquisition. At times action shifts to the palace of Prince Cesi, founder of the Society of the Lynx-Eyed, which promotes the new science, and to the lecture halls of the Jesuit Collegio Romano. Some students assume roles as faculty of the Collegio Romano and the secular University of Rome, the Sapienza. Others are Cardinals who seek to defend the faith from resurgent Protestantism, the imperial ambitions of the Spanish monarch, the schemes of the Medici in Florence, and the crisis of faith throughout Christendom. Some embrace the new cosmology, some denounce it, and still others are undecided. The issues range from the nature of faith and the meaning of the Bible to the scientific principles and methods as advanced by Copernicus, Kepler, Tycho Brahe, Giordano Bruno, and Galileo. Central texts include Aristotles On the Heavens and Posterior Analytics; Galileos Starry Messenger (1610), Letter to Grand Duchess Christina (1615) and Dialogue on the Two Chief World Systems (1632); the declarations of the Council of Trent; and the Bible.

Reacting to the Past is a series of historical role-playing games that explore important ideas by re-creating the contexts that shaped them. Students are assigned roles, informed by classic texts, set in particular moments of intellectual and social ferment.

An award-winning active-learning pedagogy, Reacting to the Past improves speaking, writing, and leadership skills, promotes engagement with classic texts and history, and builds learning communities. Reacting can be used across the curriculum, from the first-year general education class to capstone experiences. A Reacting game can also function as the discussion component of lecture classes, or it can be enlisted for intersession courses, honors programs, and other specialized curricular purposes.

Investigative Staff Of The Boston Globe

Betrayal: The Crisis in the Catholic Church

The Gospel and Catholic Church

Catechism of the Catholic Church

A Concise History of the Catholic Church

Student Activities Manual for Golosa: A Basic Course in Russian, Book One