The Subversion of Politics: European Autonomous Social Movements and the Decolonization of Everyday Life 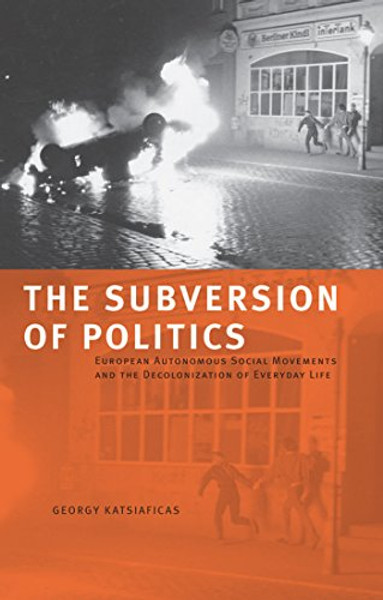 The Subversion of Politics: European Autonomous Social Movements and the Decolonization of Everyday Life

A scholarly gem which is indispensable reading for anyone interested in how social change occurs, especially in the advanced industrial countries.Carl Boggs, National University

This book is an important corrective to the all-too-common view that global capitalism is triumphant, that there is no basis for opposing the values it promotes.Barbara Epstein, University of California at Santa Cruz

Since the modern anti-globalization movement kicked off with the 1999 WTO protests in Seattle, a new generation has been engaging in anti-capitalist direct action. Its aims, politics, lifestyles, and tactics grow directly out of the autonomous social movements that emerged in Europe from the 1970s through the mid-1990s. In fact, todays infamous Black Blocs are the direct descendants of the European Autonomen. But these important historical connections are rarely noted, and never understood.

The Subversion of Politics sets the record straight, filling in the gaps between the momentous events of 1968 and 1999. Katsiaficas presents the protagonists of social revoltItalian feminists, squatters, disarmament and anti-nuclear activists, punk rockers, and anti-fascist street fightersin a compelling and sympathetic light. At the same time, he offers a work of great critical depth, drawing from these political practices a new theory of freedom and autonomy that redefines the parameters of the political itself.

George KatsiaficasFulbright fellow, former student of Herbert Marcuse, and long-time activistis Professor of Humanities and Social Sciences at Wentworth Institute of Technology in Boston, Massachusetts. Author or editor of more than 10 books, he is Managing Editor of the journal New Political Science.

The Politics of Protest: Social Movements in America