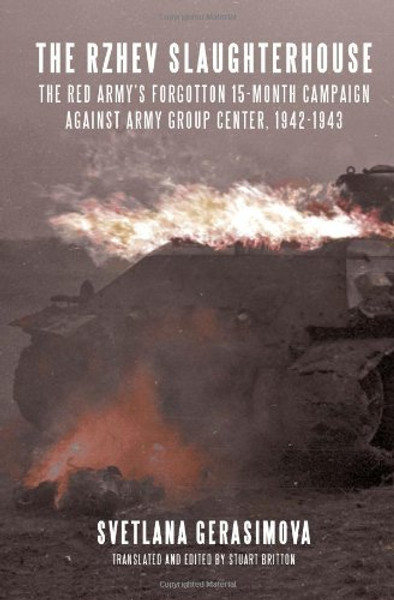 Historians consider the Battle of Rzhev one of the bloodiest in the history of the Great Patriotic War and Zhukov's greatest defeat . Veterans called this colossal battle, which continued for a total of 15 months, the Rzhev slaughterhouse or the Massacre , while the German generals named this city the cornerstone of the Eastern Front and the gateway to Berlin . By their territorial scale, number of participating troops, length and casualties, the military operations in the area of the Rzhev - Viaz'ma salient are not only comparable to the Stalingrad battle, but to a great extent surpass it. The total losses of the Red Army around Rzhev amounted to 2,000,000 men; the Wehrmacht's total losses are still unknown precisely to the present day.

Why was one of the greatest battles of the Second World War consigned to oblivion in the Soviet Union? Why were the forces of the German Army Group Center in the Rzhev - Viaz'ma salient not encircled and destroyed? Whose fault is it that the German forces were able to withdraw from a pocket that was never fully sealed? Indeed, are there justifications for blaming this lost victory on G.K. Zhukov? In this book, which has been recognized in Russia as one of the best domestic studies of the Rzhev battle, answers to all these questions have been given. The author, Svetlana Gerasimova, has lived and worked amidst the still extant signs of this colossal battle, the tens of thousands of unmarked graves and the now silent bunkers and pillboxes, and has dedicated herself to the study of its history.

Svetlana Aleksandrovna Gerasimova is a historian and museum official. After graduating from Leningrad State University with a history degree, she worked in the Urals as a middle school history teacher, before moving to Tver, where she taught a number of courses in history and local history, and about museum work and leading excursions in the Tver' School of Culture. She earned her Ph.D. in history from Tver State University in 2002. For more than 20 years, S.A. Gerasimova has been working in the Tver' State Consolidated Museum, and is the creator and co-creator of a many displays and exhibits in the branches of the Museum, and in municipal and institutional museums of the Tver' Oblast. Recent museum exhibits that she has created include The Battle of Rzhev 1942-1943 and The Fatal Forties Toropets District in the Years of the Great Patriotic War. She has led approximately 20 historical and folklore-ethnographic expeditions in the area of Tver' Oblast and is the author of numerous articles in such journals as Voprosy istorii [Questions of History], Voenno-istoricheskii arkhiv [Military History Archive], Voenno-istoricheskii zhurnal [Journal of Military History] and Zhivaia starina [The Living Past], and of other publications. In 2009, she served as a featured consultant to a Russian NTV television documentary about the Battle of Rzhev, which quickly became controversial for its very frank discussion of the campaign.

Stuart Britton is a freelance translator and editor residing in Cedar Rapids, Iowa. He has been responsible for making a growing number of Russian titles available to readers of the English language, consisting primarily of memoirs by Red Army veterans and recent historical research concerning the Eastern Front of the Second World War and Soviet air operations in the Korean War. Notable recent titles include Valeriy Zamulin's award-winning 'Demolishing the Myth: The Tank Battle at Prokhorovka, Kursk, July 1943: An Operational Narrative ' (Helion, 2011), Boris Gorbachevsky's 'Through the Maelstrom: A Red Army Soldier's War on the Eastern Front 1942-45' (University Press of Kansas, 2008) and Yuri Sutiagin's and Igor Seidov's 'MiG Menace Over Korea: The Story of Soviet Fighter Ace Nikolai Sutiagin' (Pen & Sword Aviation, 2009). Future books will include Svetlana Gerasimova's analysis of the prolonged and savage fighting against Army Group Center in 1942-43 to liberate the city of Rzhev, and more of Igor Seidov's studies of the Soviet side of the air war in Korea, 1951-1953.

Sacrifice on the Steppe: The Italian Alpine Corps in the Stalingrad Campaign, 1942-1943

Rommel's Intelligence in the Desert Campaign 1941-1943

The Passing of Armies: An Account Of The Final Campaign Of The Army Of The Potomac