The Jump: Sebastian Telfair and the High-Stakes Business of High School Ball 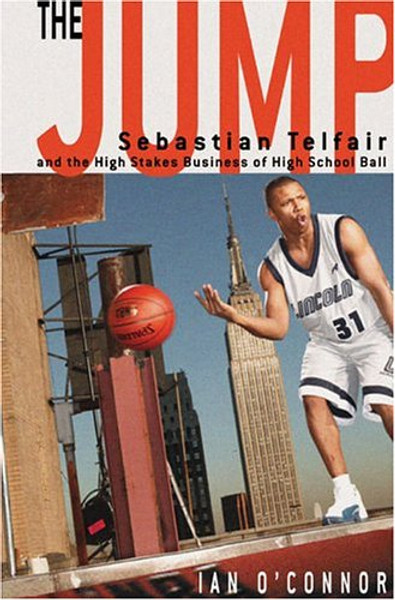 The Jump: Sebastian Telfair and the High-Stakes Business of High School Ball

On NBA draft night, June 24, 2004, high school senior Sebastian Telfair awaited his future inside a suite at the Trump International Hotel. One of the most hyped high school players of all time, with a $20 million Adidas deal in hand, Sebastian found himself in the same position as NBA superstars like Kobe Bryant and LeBron James, both of whom shot to stardom without playing a day of college ball. THE JUMP offers an inside view of Sebastian's journey-a rags-to-riches story of a kid from the Coney Island projects who succeeds in leaving behind the chaos, violence and economic hardship at home for a multi-million dollar life of professional ball and product endorsement. Drawing on exclusive interviews with friends, family, coaches, recruiters, agents and players, USA Today columnist Ian O'Connor offers an intimate portrait of the promising young player's senior year at Lincoln High School and explores the changing nature of basketball in America today.

Sebastian Telfair exemplifies a new dynamic emerging in basketball-young, talented teenagers who skip college on the way to NBA fortune and fame. But what is this trend doing to the sport? And do the adults who have hitched their hopes on Sebastian's rising star have the young player's best interests in mind? THE JUMP dives head first into today's high-stakes, anything-goes basketball culture, examining the sneaker companies intent on securing charismatic and mediagenic players to hawk their wares; college boosters willing to break NCAA rules by offering cash incentives to lure promising players to their schools; high school administrators securing big appearance fees from promoters; agents wooing players and their families-and walking the thin line dictating amateur status rules for high school and college ball.

O'Connor also delves into the dream that the NBA holds for so many families-a child drafted into the pros offers a first class ticket out of the projects. A colorful cast of characters featured in THE JUMP includes the faces shaping the sport today: Rick Pitino, head coach of the University of Louisville, who recruits Sebastian with the hope of delivering his team to an NCAA championship only to see his dreams dashed by Sebastian's decision to enter the NBA draft; Andy Miller, the agent who vies to sign up Sebastian despite Erica and Otis Telfair's reservations; Stephon Marbury, star of the New York Knicks, who sees Sebastian more as a rival than a cousin (THE JUMP delivers exclusive details on the fracture in the Marbury and Telfair relationship, including interviews with the point guards and relatives on the subject of the family feud); Sonny Vacaro, at different times the face of Nike, Adidas, and Reebok, who uses sneaker company cash to entice coaches and young players; Jay-Z, rapper and owner of Telfair's summer-league team.

Under O'Connor's penetrating scrutiny, Sebastian Telfair becomes the prism through which the circus of modern basketball is explored. Can he succeed, or will he flame out-too young, too small, too unprepared? And what is this new trend in basketball doing to the athletes, to college basketball programs, to the quality of play in the NBA and to society at large? As Dave Kindred of The Sporting News states, THE JUMP is a 21st-century thrill ride into the shadows and bright lights of a basketball culture that breaks hearts and makes superstars.

Vocabulary for the High School Student