The Hitler Book: The Secret Dossier Prepared for Stalin from the Interrogations of Otto Guensche and Heinze Linge, Hitler's Closest Personal Aides 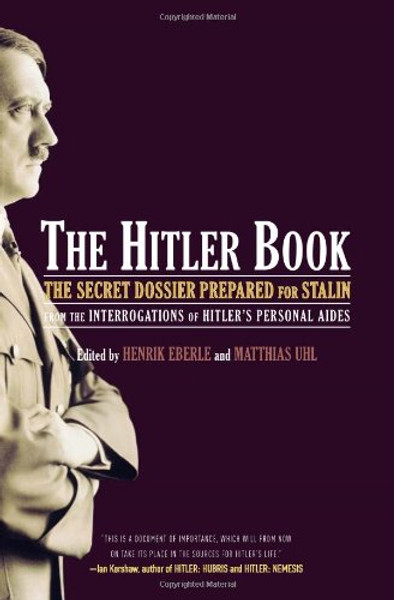 The Hitler Book: The Secret Dossier Prepared for Stalin from the Interrogations of Otto Guensche and Heinze Linge, Hitler's Closest Personal Aides

Stalin had never been able to shake off the nightmare of Adolf Hitler. Just as in 1941 he refused to understand that Hitler had broken their non-aggression pact, he was in 1945 unwilling to believe that the dictator had committed suicide in the debris of the Berlin bunker. In his paranoia, Stalin ordered his secret police, the NKVD, precursor to the KGB, to explore in detail every last vestige of the private life of the only man he considered a worthy opponent, and to clarify beyond doubt the circumstances of his death.

For months two captives of the Soviet Army--Otto Guensche, Hitler's adjutant, and Heinz Linge, his personal valet--were interrogated daily, their stories crosschecked, until the NKVD were convinced that they had the fullest possible account of the life of the Fhrer. In 1949 they presented their work, in a single copy, to Stalin. It is as remarkable for the depth of its insight into Adolf Hitler--from his specific directions to Linge as to how his body was to be burned, to his sense of humor--as for what it does not say, reflecting the prejudices of the intended reader: Joseph Stalin. Nowhere, for instance, does the dossier criticize Hitler's treatment of the Jews.

Today, the 413-page original of Stalin's personal biography of Hitler is a Kremlin treasure and it is said to be held in President Putin's safe. The only other copy, made by order of Stalin's successor, Nikita Khrushchev, in 1959, was deposited in Moscow Party archives under the code number 462A. It was there that Henrik Eberle and Matthias Uhl, two German historians, found it. Available to the public in full for the first time, The Hitler Book presents a captivating, astonishing, and deeply revealing portrait of Hitler, Stalin, and the mutual antagonism of these two dictators, who between them wrought devastation on the European continent.

Hitler and Churchill: Secrets of Leadership

Bloodlands: Europe Between Hitler and Stalin

Lenin, Stalin, and Hitler: The Age of Social Catastrophe

Hitler's Children: The Hitler Youth and the SS