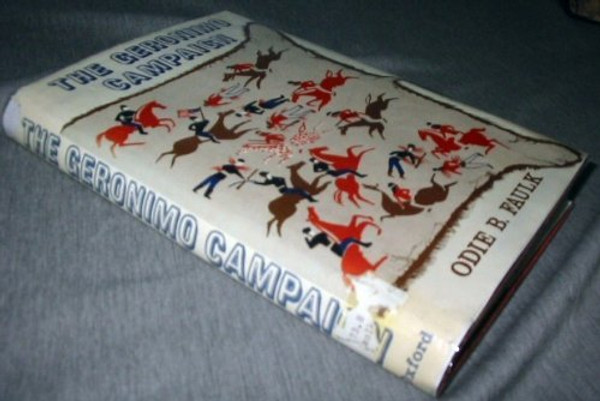 The surrender of the great Apache leader Geronimo to U.S Army Lieutenant Charles B. Gatewood in August of 1886 brought to an end a struggle that had begun in the early years of the century, and had figured prominently in the western campaign of the Civil War. The words addressed by Gatewood to Geronimo as they met along the banks of Mexico's Bavispe River echoed those spoken in many such a meeting between victorious American commander and vanquished Native American. Accept these terms or fight it out to the bitter end, said Gatewood. The terms were forced relocation to Florida and the ceding of the ancestral homeland of the Apaches to white settlers; the bitter end was, quite simply, annihilation.
In The Geronimo Campaign, Odie B. Faulk, a leading historian of the American Southwest, offers a lively and often chilling account of the war that raged over the deserts and mountains of Arizona, New Mexico, and northern Mexico in the mid 1880's, and traces its legacy well past the ultimatum delivered to Geronimo on August 25, 1886. Faulk is especially concerned with the campaign's wider historical setting and significance, and with the sad record of betrayal of the Native American by the U.S. Government.
In a very real sense, it is the stuff of Greek tragedy. Here among the mesas of the Southwest was inevitable conflict and inevitable defeat, with both sides losing and yet surviving their loss. The Apaches were forced to endure years of captivity and humiliation, and--like the Sioux, Comanche, and Nez Perc before them--the obliteration of their traditional way of life. The Army, seemingly the winner, was torn by conflicting claims of glory by its hubristic leaders. And Americans lost much that Apache culture might have contributed to their country, as well as more than a measure of American self-respect.
Few emerge from Faulk's riveting account with their dignity and stature intact: only the titanic figure of Geronimo, and to a lesser extent the two men he knew and trusted among his opponents, Gatewood and General George Crook, retain a semblance of honor. Faulk shows that neither side wanted war, that both sides believed in the righteousness of their cause, and that the real instigators of the conflict were rapacious American settlers--the Tucson Ring of merchants--who sold grain, hay, and other provisions to the troops as well as to those living on the Indian reservations.
Faulk's realistic and colorful narrative highlights many of the campaign's ironies as well as its dangers and vicissitudes. In addition, it vividly recreates life in an Army command post on the western frontier, offers an exceptionally clear and sympathetic life history of Geronimo, and sheds new light on the conflict through many hitherto unknown documents originally collected by Gatewood's son. Also included is a brief history of the Apache people, a full bibliography and notes, and many vintage photographs which lend a rare immediacy to this tragic story.
The Geronimo Campaign ends with the great chief hundreds of miles away from his ancestral home, Crook relieved of his command, and Gatewood largely forgotten in the honors and awards bestowed by the Army in recognition of Geronimo's capitulation. A true American saga, this is a book for anyone who wishes to understand the roots of, and the reasons for, the tragic Indian Wars of the nineteenth century, a tragedy whose repercussions are still felt today.

The Secret of the Sphinx (Geronimo Stilton #2)

The Discovery of America (Geronimo Stilton #1)

The Truth About Geronimo

Geronimo Stilton #53: Rumble in the Jungle