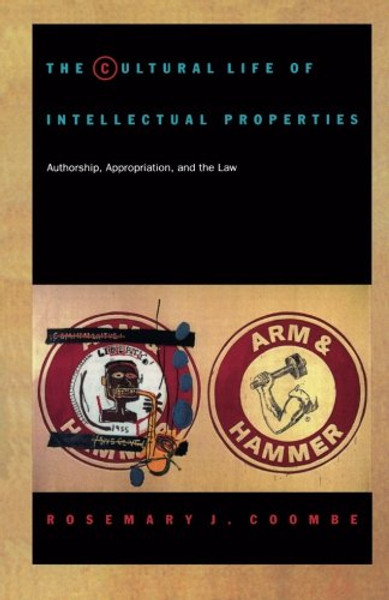 Logos, trademarks, national insignia, brand names, celebrity images, design patents, and advertising texts are vibrant signs in a consumer culture governed by a regime of intellectual property laws. In The Cultural Life of Intellectual Properties, professor of law and cultural anthropologist Rosemary J. Coombe brings an illuminating ethnographic approach to an analysis of authorship and the role law plays in shaping the various meanings that animate these protected properties in the public sphere.
Although such artifacts are ubiquitous in contemporary culture, little attention has been paid to the impact of intellectual property law in everyday life or to how ownership of specific intellectual properties is determined and exercised. Drawing on a wide range of cases, disputes, and local struggles, Coombe examines these issues and dismantles the legal assumption that the meaning and value of a text or image is produced exclusively by an individual author or that authorship has a single point of origin. In the process, she examines controversies that include the service of turbanned Sikhs in the Royal Canadian Mounted Police and the use of the term Olympic in reference to the proposed gay Olympic Games. Other chapters discuss the appropriation of such celebrity images as the Marx brothers, Judy Garland, Dolly Parton, James Dean, and Luke Skywalker; the conflict over team names such as the Washington Redskins; and the opposition of indigenous peoples to stereotypical Native American insignia proffered by the entertainment industry. Ultimately, she makes a case for redefining the political in commodified cultural environments.
Significant for its insights into the political significance of current intellectual property law, this book also provides new perspectives on debates in cultural anthropology, cultural studies, and political theory. It will therefore interest both a wide scholarly and a general audience.

Intellectual Property Law in the Sports and Entertainment Industries