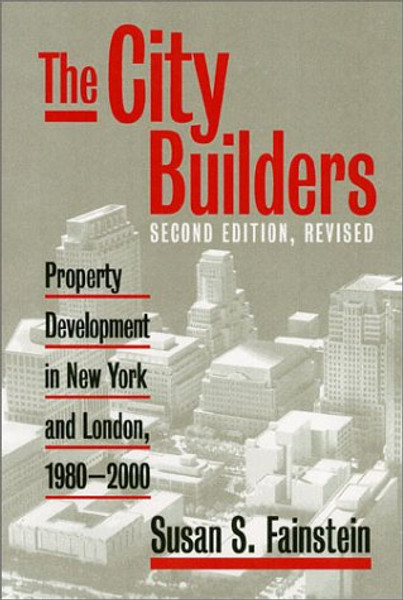 In the last twenty years, urban centers worldwide have experienced enormous booms and busts as real-estate developers, financial institutions, and public officials first poured resources into physical redevelopment, then watched as the market collapsed before booming again in the 1990s. In this extensively revised edition of her highly regarded The City Builders, Susan Fainstein examines major redevelopment efforts in New York and London to uncover the forces behind these investment cycles and the role that public policy can play in moderating market instability.

Fainstein chronicles the progress of three development projects in New York (Times Square, downtown Brooklyn, and Battery Park City) and three in London (King's Cross, Spitalfields, and Docklands). Analyzing the political and economic processes underlying physical changes in these two cities during the last two decades, she uncovers the role played by developers' perceptions and strategies in their interactions with both public policy-makers and property markets. This new edition follows each development effort to the present and places the discussion in a newly strengthened theoretical framework.

In her investigation of the convergence between London and New York during the 1980s and then the divergence that began in the 1990s, Fainstein traces similarities and differences in the effects of globalization, ideology, and institutional structure in each city's experience. This comparative framework also sheds considerable light on the contributing roles of structure and agency in creating final outcomes.

Fainstein concludes by assessing the impact of theme park development on the urban fabric and recommending a set of realistic strategies to both redevelop cities and improve the lives of urban residents.

Side by Side: Student Book 1, Third Edition