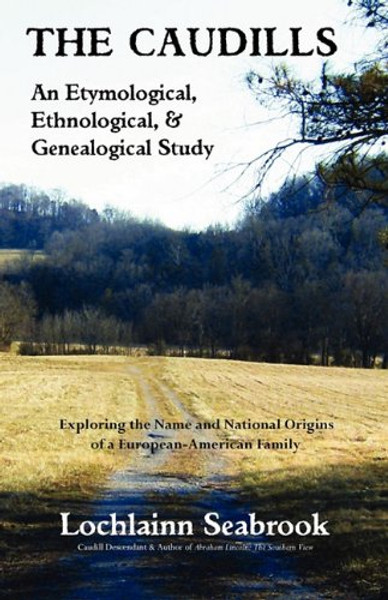 The Caudills are one of Americas largest and most historically interesting families. Originating in the South in the early 1700s, they have today spread out across nearly all fifty states, playing a vital role in the settling of America, from Appalachia to the Pacific Ocean. In his book The Caudills: An Etymological, Ethnological, and Genealogical Study, the author, award-winning Southern historian Colonel Lochlainn Seabrook - a Caudill descendant himself - has penned a thoroughly captivating work, one that focuses on the etymology of the Caudill surname, the ethnology of the Caudills, and the genealogy of their ancestral line, dating back to 16th-Century Europe.

Throughout its well researched 300-pages, one will find a treasure-trove of information, including a detailed discussion of the origins of the name and family, an extensive Caudill family tree, the Caudill family Coat of Arms, a list of Caudill researchers, useful Websites, and maps to Cawdor Castle in Scotland, with extra material on surname spelling variations and Caudill place-names. The foreword is by Delmerene Caudill of Letcher County, Kentucky.

This is an important and unique book that everyone with an interest in the Caudills will be proud to have in their library. With its wealth of helpful research data on not only this intriguing European-American family, but on allied families as well, The Caudills is a must-have for all Caudill family members and friends, as well as Caudill researchers. Available in paperback and hardcover.

Civil War scholar Lochlainn Seabrook, a Kentucky Colonel and a descendant of the families of Alexander H. Stephens and John S. Mosby, is the most prolific and popular pro-South writer in the world today. Known as the new Shelby Foote, he is a recipient of the prestigious Jefferson Davis Historical Gold Medal and the author of over 50 books that have introduced hundreds of thousands to the truth about the War for Southern Independence. A seventh-generation Kentuckian of Appalachian heritage and the sixth great-grandson of the Earl of Oxford, Colonel Seabrook has a forty-year background in American and Southern history, and is the author of the international blockbuster Everything You Were Taught About the Civil War is Wrong, Ask a Southerner!

His other titles include: The Great Yankee Coverup: What the North Doesnt Want You to Know About Lincolns War; Confederacy 101: Amazing Facts You Never Knew About Americas Oldest Political Tradition; Confederate Flag Facts: What Every American Should Know About Dixie's Southern Cross; Women in Gray: A Tribute to the Ladies Who Supported the Southern Confederacy;Everything You Were Taught About American Slavery is Wrong, Ask a Southerner!; Christ is All and in All; Seabrook's Bible Dictionary; A Rebel Born: A Defense of Nathan Bedford Forrest;Give This Book to a Yankee: A Southern Guide to the Civil War for Northerners; Jesus and the Law of Attraction;Abraham Lincoln: The Southern View; and Honest Jeff and Dishonest Abe: A Southern Childrens Guide to the Civil War.

The Genealogical Science: The Search for Jewish Origins and the Politics of Epistemology (Chicago Studies in Practices of Meaning)