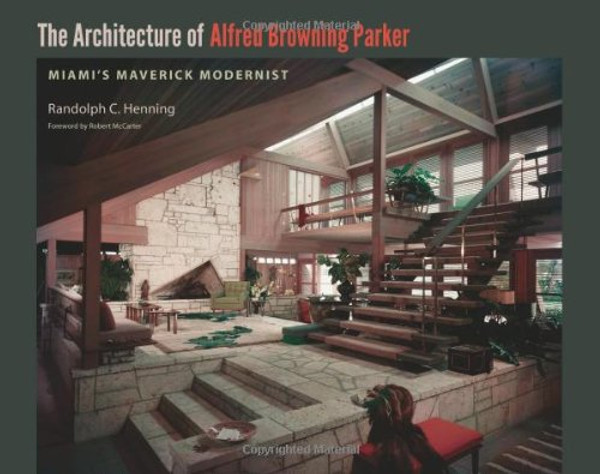 The first authorized examination of a twentieth-century architectural giant
A comprehensive survey of one of Floridas most prolific and influential architects of the mid-twentieth century. In an era when we seek resiliency in design and building, there are lessons to be learned in the work of Alfred Browning Parker, a subtropical master.Anthony Abbate, AIA, and contributor to Miami Modern Metropolis
Alfred Browning Parker (b. 1916) is one of the twentieth centurys most famous Florida-based architects. A principal leader of the Coconut Grove School of tropical organic architecture, he is arguably the most renowned and honored architect in the history of Florida architecture, and his influence has been felt throughout the United States and the Caribbean. Attaining an almost rock starlike status in his home city of Miami, Parker was publicly praised by Frank Lloyd Wright, something Wright rarely did.
Parkers work and philosophy has had an ecological and environmental basis since the early 1940s. He began expressing an interest in alternative fossil fuels and renewable energy sources in the 1970s, far ahead of the current trends in green and energy-conscious architecture. He has continually placed an emphasis on using local materials and has been increasingly praised for his early exploration in environmentally friendly design.
?Randolph Hennings overview of the life work of this modernist master features sixty-nine of the more than five hundred residential and commercial structures Parker created between 1942 and 2001. The descriptions are accompanied by nearly 400 color photographs, more than a third of which are vintage images from renowned photographer Ezra Stoller. Henning also provides a biographical narrative, excerpts from Parkers own writings, a full bibliography, and a complete list of Parkers works.
Randolph C. Henning is the author of At Taliesin: Newspaper Columns by Frank Lloyd Wright and the Taliesin Fellowship, 19341937 and Frank Lloyd Wrights Taliesin: Illustrated by Vintage Postcards. He is a practicing architect and lives in Lewisville, North Carolina.