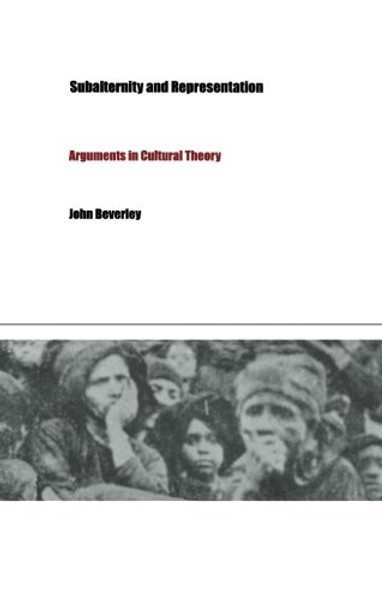 The term subalternity refers to a condition of subordination brought about by colonization or other forms of economic, social, racial, linguistic, and/or cultural dominance. Subaltern studies is, therefore, a study of power. Who has it and who does not. Who is gaining it and who is losing it. Power is intimately related to questions of representationto which representations have cognitive authority and can secure hegemony and which do not and cannot. In this book John Beverley examines the relationship between subalternity and representation by analyzing the ways in which that relationship has been played out in the domain of Latin American studies.

Dismissed by some as simply another new fashion in the critique of culture and by others as a postmarxist heresy, subaltern studies began with the work of Ranajit Guha and the South Asian Subaltern Studies collective in the 1980s. Beverleys focus on Latin America, however, is evidence of the growing province of this field. In assessing subaltern studies purposes and methods, the potential dangers it presents, and its interactions with deconstruction, poststructuralism, cultural studies, Marxism, and political theory, Beverley builds his discussion around a single, provocative question: How can academic knowledge seek to represent the subaltern when that knowledge is itself implicated in the practices that construct the subaltern as such? In his search for answers, he grapples with a number of issues, notably the 1998 debate between David Stoll and Rigoberta Mench over her award-winning testimonial narrative, I, Rigoberta Mench. Other topics explored include the concept of civil society, Florencia Mallons influential Peasant and Nation, the relationship between the Latin American lettered city and the Tpac Amaru rebellion of 17801783, the ideas of transculturation and hybridity in postcolonial studies and Latin American cultural studies, multiculturalism, and the relationship between populism, popular culture, and the national-popular in conditions of globalization.

This critique and defense of subaltern studies offers a compendium of insights into a new form of knowledge and knowledge production. It will interest those studying postcolonialism, political science, cultural studies, and Latin American culture, history, and literature.