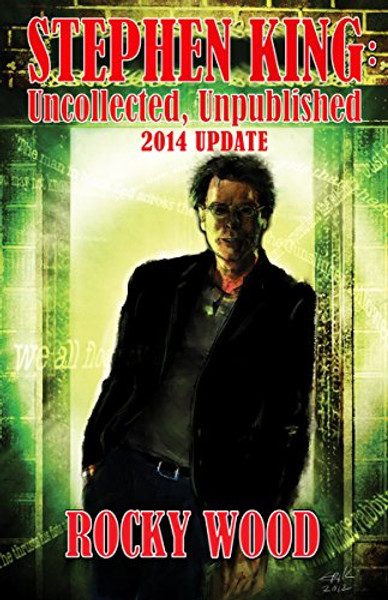 Major Updates in this 2014 Update for the Revised and Expanded Edition of Stephen King: Uncollected, Unpublished.

Available in the trade paperback and e-book versions from Overlook Connection Press.

ONLY FOUND IN THE OVERLOOK CONNECTION PRESS EDITIONS!

As with Rocky Wood's 2012 Revised and Expanded edition of Stephen King: Uncollected, Unpublished, this 2014 Update is an addendum to that volume and features many new and rare Stephen King pieces not previously discussed.

There are a multitude of interesting updates in the revised edition of the classic book about Stephen Kings hidden work, Stephen King: Uncollected, Unpublished. This edition is likely to prove to the definitive book about Kings uncollected, unpublished and lost works.

The Stephen King Uncollected Unpublished Fourth Revised and Expanded edition is still available and can be purchased together to give you a complete and current information to these rare works.

In this Addendum to previous editions you will find full detail about: A poem lost since King s college days; Two unpublished short stories from the 1970s; A story that won King a prize (and a lecture) when he was in High School; Two lost stories from King s fan fiction days; A play he wrote when he was 12 for his boy scout troop; Important updates are provided to information about these previously known works After the Play; Kings senior Class Day play (including its title, content, and comments from King); and the story King wrote in fifth grade about his classmates being taken hostage.

A number of stories Stephen King is rumored to have written are dealt with.

Some obscure stories have been republished in easy to access form and that information is provided for readers.

A centerpiece of this Update is the full description of a lengthy busted novel Phil and Sundance. In addition, a new busted story that appeared to have great promise is described.

The latest published but uncollected works are analyzed, including: