Seeds of Terror: How Heroin Is Bankrolling the Taliban and al Qaeda 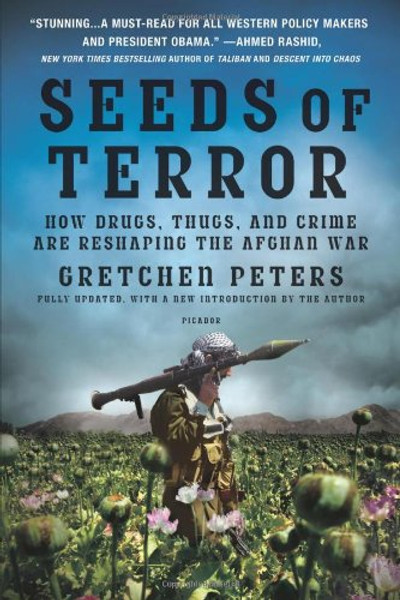 Seeds of Terror: How Heroin Is Bankrolling the Taliban and al Qaeda

Most Americans think of the Taliban and al Qaeda as a bunch of bearded fanatics fighting an Islamic crusade from caves in Afghanistan. But that doesn't explain their astonishing comeback along the Pakistan-Afghanistan border. Why is it eight years after we invaded Afghanistan, the CIA says that these groups are better armed and better funded than ever?

Seeds of Terror will reshape the way you think about America's enemies, revealing them less as ideologues and more as criminals who earn half a billion dollars every year off the opium trade. With the breakneck pace of a thriller, author Gretchen Peters traces their illicit activities from vast poppy fields in southern Afghanistan to heroin labs run by Taliban commanders, from drug convoys armed with Stinger missiles to the money launderers of Karachi and Dubai.

This isn't a fanciful conspiracy theory. Seeds of Terror is based on hundreds of interviews with Taliban fighters, smugglers, and law enforcement and intelligence agents. Their information is matched by intelligence reports shown to the author by frustrated U.S. officials who fear the next 9/11 will be far deadlier than the first--and paid for with drug profits.

Seeds of Terror makes the case that we must cut terrorists off from their drug earnings if we ever hope to beat them. This war isn't about ideology or religion. It's about creating a new economy for Afghanistan--and breaking the cycle of violence and extremism that has gripped the region for decades.

Inside Al-Qaeda and the Taliban: Beyond Bin Laden and 9/11

An Enemy We Created: The Myth of the Taliban-Al Qaeda Merger in Afghanistan

Al Qaeda and What It Means to Be Modern