Savages and Civilization: Who Will Survive? 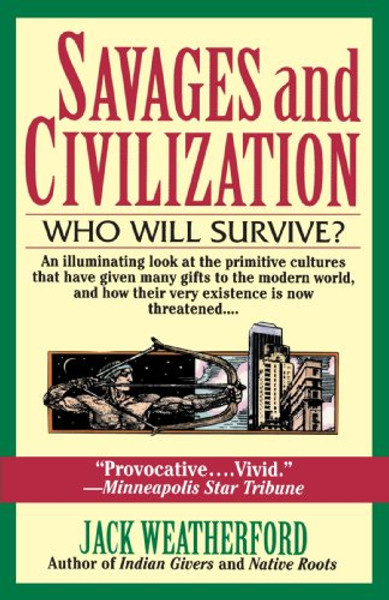 Savages and Civilization: Who Will Survive?

In Indian Givers and Native Roots, renowned anthropologist Jack Weatherford opened the eyes of tens of thousands of readers to the clash between Native American and European cultures. Now, in his brilliant new book, Weatherford broadens his focus to examine how civilization threatens to obliterate unique tribal and ethnic cultures around the world -- and in the process imperils its own existence.

As Weatherford explains, the relationship between civilized and savage peoples through history has encompassed not only violence, but also a surprising degree of cooperation, mutual influence, trade, and intermarriage. But this relationship has now entered a critical stage everywhere in the world, as indigenous peoples fiercely resist the onslaught of a global civilization that will obliterate their identities. Savages and Civilization powerfully demonstrates that our survival as a species is based not on a choice between savages and civilization, but rather on a commitment to their vital coexistence.

War Before Civilization: The Myth of the Peaceful Savage

Chinese Lives: The People Who Made a Civilization

The Last Lion: Winston Spencer Churchill: Defender of the Realm, 1940-1965

Who Set You Flowin'?: The African-American Migration Narrative (Race and American Culture)

Extreme Exposure: An Anthology of Solo Performance Texts from the Twentieth Century

Americans at Risk: Why We Are Not Prepared for Megadisasters and What We Can Do