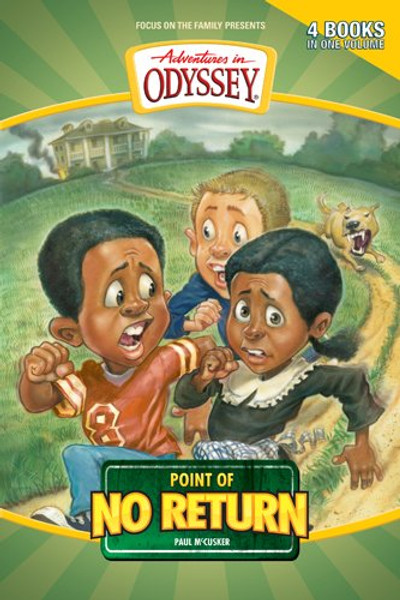 Fans of the long-running audio series Adventures in Odyssey can hardly remember a time when there wasn't a Connie or a Eugeneor an Imagination Station. But there was. Now step back in time as these exciting novels whisk you away to the days before the popular radio show.

Standing up for what you believe isnt easy, as the kids in Odyssey discover in these four engaging stories. In Point of No Return, Jimmy Barclay finds that doing the right thing can cost him everything he thinks is most precious. In Dark Passage, Jack Davis and Matt Booker ignore a keep-out sign on the Imagination Station. Suddenly, theyre in preCivil War America, where slave traders capture Matt. The story continues in Freedom Run as Matt escapes from the slave traders and is joined by Jack for a thrilling Underground Railroad adventure. In The Strangers Message, Mr. Whittaker and the kids at Whits End meet a stranger in need and ask themselves, What would Jesus do?

Author Paul McCusker has written over 200 episodes of Adventures in Odyssey and been involved from the early days of the show. Set in a time before the radio show, these stories often reference the beginnings of inventions like the Imagination Station, familiar characters like the Barclays coming to town, and other AIO references that fans will enjoy.