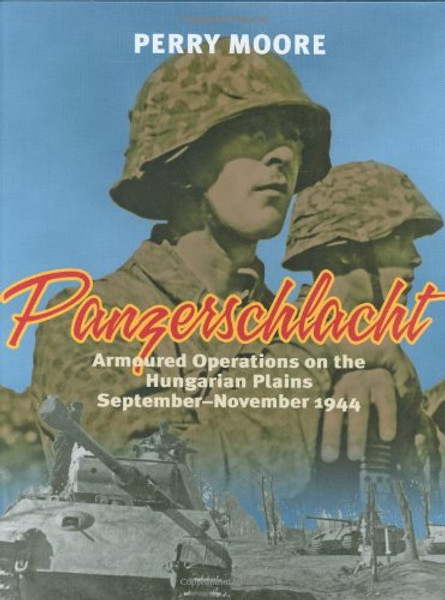 Panzerschlacht' covers in detail the unraveling of the southern sector of the Eastern Front during late summer and autumn 1944, which led to some of the largest and most vicious, yet unknown, tank battles of the Second World War.

Slammed by continuous Russian attacks that ripped the Romanian Front to pieces and by late August had caused Romania to defect to the Soviets, Germans forces were left threadbare. Only Hungary narrowly failed to defect to the USSR, and was coerced into remaining Germany's ally. Despite a gross imbalance in numbers, the German Army, and more notably, their Panzer divisions (some with only 30 AFVs) delayed, disrupted and destroyed much larger Russian units with successful counter-attacks.

As the Russians blitzed through Romania and neared Hungary in late August 1944, it was the Hungarian Army that stymied the Red horde. The Hungarian units pulled themselves together and in September conducted two very important and overlooked counterattacks: Arad and Torda. The Arad counterattack sent the defending Romanians reeling, forcing them to give up the city of Arad and beyond as the Hungarian 1st Armoured Division faced little opposition. At Torda, the Hungarian 2nd Armoured Division also made significant gains towards the mountain passes until the arrival of Russian armor. The book covers these in detail with maps so often missing in other accounts. Both battles temporarily put the 'brake' on the Russian blitzkrieg.

From mid-September until November, the focus of the Russians now became the Hungarian Plains - a flat area ideally suited to the massive and chaotic tank battles that occurred throughout October. The Russian operations around Debrecen envisioned the 6th Guards Tank Army and others cutting out the seemingly meager German and Hungarian forces across the line northwards to Debrecen and Nyiraghaza. Their plan, if successful, would encircle the whole German 8th Army still holding on east in the mountains. It was aimed to deal a crippling blow. However, the German commanders saw the writing on the wall and began to withdraw their 8th Army. As the Russians ground northwards, the German 6th and 8th Armies fought tooth and nail during their withdrawal. It was no easy victory for either side.

Panzerschlacht covers all of these operations in detail. Using excellent color maps and detailed orders of battles showing unit strengths, the reader can follow this David versus Goliath event as it unfolded. A large number of rare archival photographs, many previously unpublished, complement the text. Full-color artwork provides detailed information about the camouflage and markings carried by the vehicles involved in the fighting, including the rarely-seen Hungarian AFVs. A variety of German, Hungarian, Russian and Romanian sources were used by the author. Overall, this is an excellent account of a hitherto-unknown series of major tank battles fought on the Eastern Front in the autumn of 1944.

Hell's Highway: A Chronicle of the 101st Airborne in the Holland Campaign, September-November 1944

Achtung-Panzer!: The Development of Armoured Forces, Their Tactics and Operational Potential