Making It Happen: Fred Goodwin, RBS and the Men Who Blew Up the British Economy 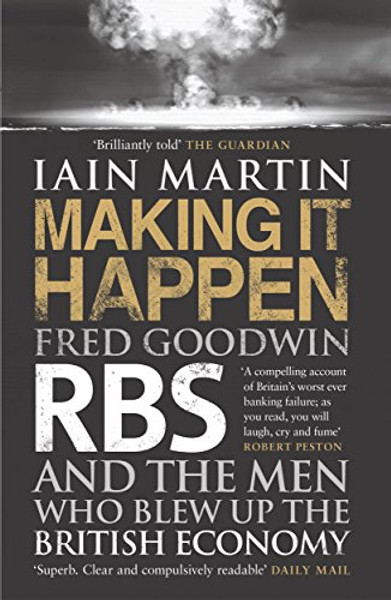 Making It Happen: Fred Goodwin, RBS and the Men Who Blew Up the British Economy

An explosive, controversial account of the collapse of RBS and the collapse of the British economy - shortlisted for FINANCIAL TIMES AND GOLDMAN SACHSBUSINESS BOOK OF THE YEARAWARD2013.When RBS collapsed and had to be bailed out by the taxpayer in the financial crisis of October 2008 it played a leading role in tipping Britain into its deepest economic downturn in seven decades. The economy shrank, bank lending froze, and hundreds of thousands lost their jobs. Living standards are still falling and Britons will be paying higher taxes for decades to pay the clean-up bill. How on earth had a small Scottish bank grown so quickly to become a global financial giant that could do such immense damage when it collapsed? Based on over 80 interviews and with access to diaries and papers kept by those at the heart of the meltdown, this is the definitive account of the RBS disaster which still casts a shadow over our economy. In Making It Happen, senior executives, board members, Treasury insiders and regulators reveal how the bank's mania for expansion led it to take enormous risks its leaders didn't understand. From the birth of the Royal Bank in 18th century Scotland, to the manic expansion under Fred Goodwin in the middle of a mad boom and culminating in the epoch-defining collapse, Making It Happenis the full, extraordinary story.

How to Manage: The Art of Making Things Happen