Losing the Golden Hour: An Insider's View of Iraq's Reconstruction (An Adst-dacor Diplomats and Diplomacy Book) 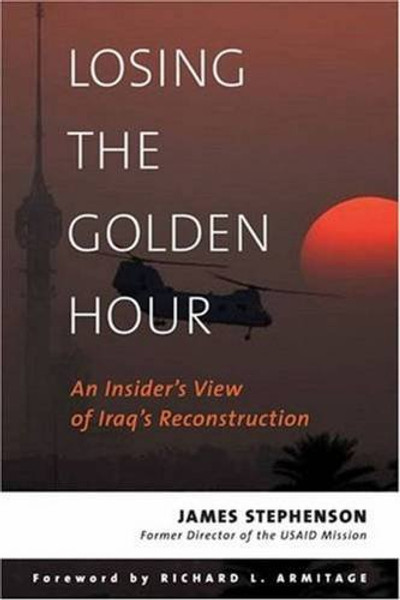 Losing the Golden Hour: An Insider's View of Iraq's Reconstruction (An Adst-dacor Diplomats and Diplomacy Book)

In emergency medicine, the golden hour is the first hour after injury during which treatment greatly increases survivability. In post-conflict transition terminology, it is the first year after hostilities end. Without steadily improving conditions then, popular support declines and chances for economic, political, and social transformation begin to evaporate. James Stephenson believes we have lost Iraqs golden hour. A veteran of postconflict reconstruction on three continents, he ran the Iraq mission of the Agency for International Development in 200405 with more than a thousand employees and expatriate contractors. The Coalition Provisional Authority, which oversaw the largest reconstruction and nation-building exercise ever, was a dysfunctional organization the Department of Defense cobbled together with temporary employees and a few experienced professionals from the State Department and other agencies. Iraqis soon became disillusioned, and the insurgency grew. Losing the Golden Hour tells of hubris, incompetence, courage, fear, and duty. It is about foreign assistance professionals trying to overcome the mistakes of an ill-conceived occupation and help Iraqis create a nation after decades of despair. Neither criticizing nor defending U.S. foreign policy, Stephenson offers an informed assessment of Iraqs future. Selected for the Diplomats and Diplomacy Book Series of the Association for Diplomatic Studies and Training and Diplomatic and Consular Officers, Retired.

The Rise of Mutual Funds: An Insider's View

Denial and Deception: An Insider's View of the CIA