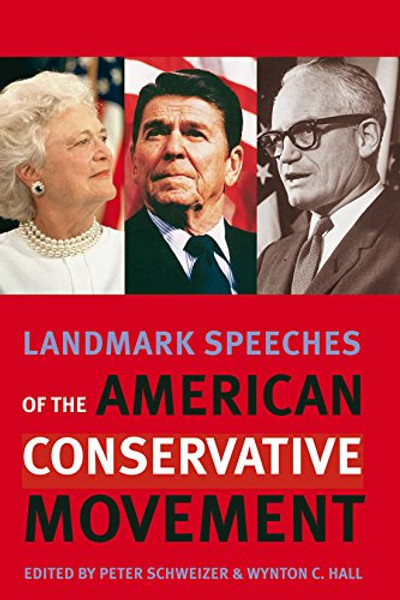 As Ronald Reagan declared, the conservative banner is one of bold, unmistakable colors, not pastel shades. Since World War II, the American conservative movement has changed the colors of the national political landscape. Here, in its own words, is the body of thought and rhetoric that has painted the movements banner.

Newt Gingrich, champion of conservatism, said that, in this volume, Peter Schweizer and Wynton Hall have captured the key moments in the emergence of modern conservatism. Steve Forbes also praised this work as a timely, much-needed reminder of what the movement is truly about. Without a doubt, Landmark Speeches of the American Conservative Movement is a book that will interest anyone with a passion for politics, the spoken word, or history.

The thirteen speeches in this volume powerfully capture the principles, images, and causes that constitute modern American conservatism. Drawing on such thinkers as Russell Kirk and Richard M. Weaver, Schweizer and Hall vividly illustrate the ideas that have moved the conservative movement from the margins of society to the citadels of power.

An introduction to each speech explains the context in which it was first delivered and notes the impact of each statement on the movement and the nation.

The perfect gift for those who value conservatism or seek to understand it, Landmark Speeches of the American Conservative Movement offers food for thought and action. For historians, political scientists, and students of public communication, the book is an essential source for the ideas that have shaped American society since 1945.

The Penguin Book of Historic Speeches

The Penguin Book of Modern Speeches