Korsun Pocket: The Encirclement and Breakout of a German Army in the East, 1944 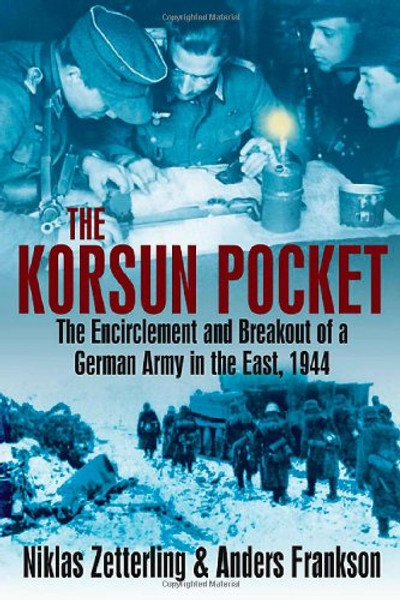 Korsun Pocket: The Encirclement and Breakout of a German Army in the East, 1944

During the second half of 1943, after the failure at Kursk, Germanys Army Group South fell back from Russia under repeated hammer blows from the Red Army. Under Erich von Manstein, however, the Germans were able to avoid serious defeats, while at the same time fending off Hitlers insane orders to hold on to useless territory. Then, in January 1944, a disaster happened. Six divisions of Army Group South became surrounded after sudden attacks by the 1st and 2nd Ukrainian Fronts under command of generals Nikolai Vatutin and Ivan Konev around the village of Korsun (near the larger town of Cherkassy on the Dnieper). The Germans greatest fear was the prospect of another Stalingrad, the catastrophe that had occurred precisely one year before. This time, though, Manstein was in control from the start, and he immediately rearranged his Army Group to rescue his trapped divisions. A major panzer drive got underway, led by General der Panzertruppen Hans Hube, a survivor from Stalingrad pocket, which promptly ran up against several soviet tank armies. Leading the break-in was Franz Baeke with his Tiger and Panther-tanks. Due to both weather and ferocious resistance, the German drive stalled. Ju-52s still flew into Korsuns airfield, delivering supplies and taking out wounded, but it soon became apparent that only one option remained for the beleaguered defenders: breakout. Without consulting Hitler, on the night of February 16 Manstein ordered the breakout to begin. Led by the strongest formation within the pocket, SS Wiking, the trapped forces surged out and soon rejoined the surrounding panzer divisions who had been fully engaged in weakening the ring. When dawn broke, the Soviets realized their prey was escaping. Although the Germans within the pocket lost nearly all of their heavy weapons and left many wounded behind, their escape was effected. Stalin, having anticipated another Stalingrad, was left with little but an empty bag, as Army Group Souththis timehad pulled off a rescue. In The Korsun Pocket, Niklas Zetterling, a researcher at the Swedish Defense College since 1995 and Anders Frankson, have provided a highly detailed and often breathtaking account of one of the most dramatic battles of World War II. From grand strategy to soldiers voices on the ground, including expert statistical analysis, the action, and the stakes, of the battle at Korsun are made vividly clear.

To the Bitter End: The Final Battles of Army Groups North Ukraine, A, and Center-Eastern Front, 1944-45

The Limits of Empire: The Roman Army in the East (Clarendon Paperbacks)