Knightfall: Knight Ridder and How the Erosion of Newspaper Journalism Is Putting Democracy at Risk 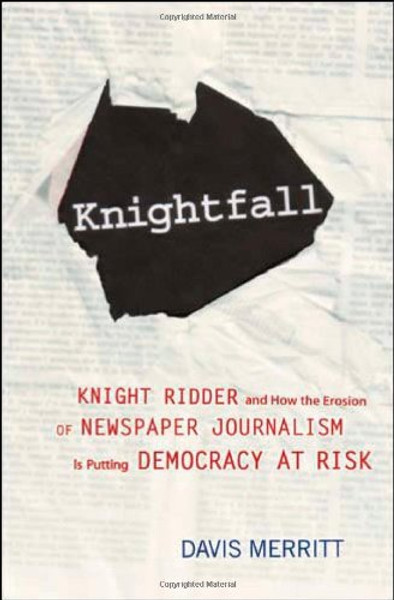 Knightfall: Knight Ridder and How the Erosion of Newspaper Journalism Is Putting Democracy at Risk

The First Amendment to the U.S. Constitution is clear: Congress shall make no law abridging freedom of the press. And yet a force seemingly even more powerful than the supreme law of the land threatens one of our nation's most precious guarantors of freedom. For more than two centuries, American newspapers have collected, organized, and disseminated the information that makes democracy possible. Occasional opponents of a free press have not been able to cripple newspapers and despite dire predictions, neither have radio, television, or the Internet. But greed can kill American newspapers, thus eliminating the crucial synergy between journalism and democracy. The reality that newspapers must remain financially viable has always dictated compromises between the competing missions of profit and public service. But in recent years the essential balancing of those missions has been replaced by a single-minded pursuit of profit. Whether the chosen method is scaling back of content, cutting corners to control costs, or dismantling the traditional wall separating the news and business departments, the result is the same: the watering down of newspaper journalism, which is the core of all American journalism. Without fundamental change in newspapers' corporate boardrooms, the flow of information that Americans need to govern themselves will dry up. In Knightfall, Davis Buzz Merritt, a 40-year newspaperman whose career runs parallel to the seismic shift in journalism's landscape, examines one notable exemplar of this growing trend, Knight Ridder, America's second-largest newspaper company with holdings including The Philadelphia Inquirer, The Miami Herald, the Detroit Free Press, and the Mercury News in San Jose. Merritt was a participant-observer in the 1974 marriage of two newspaper companies, a union that seemed made in heaven. Knight Newspapers' longstanding tradition of excellence in journalism coupled with Ridder Publications' business savvy should have created a unique company offering the best of both worlds. That it did not happen is a reflection of complex changes in American society and the realities of modern business pressures driven by Wall Street. There are no pure heroes or pure villains in this story; the players were doing what their training, background, and respective family histories urged them to do. But the story's outcome is ominous for American democracy. Merritt's personal accounts of the 30 years since the merger illustrate the degree to which what we know is being limited. Further, his portraits of key figures, analysis of societal changes, and dozens of interviews with others who were (and are) there reveal that not only is he on target, he is also not alone in his unsettling conclusions. A free press is a cornerstone of our democracy. The erosion of that foundation is a catastrophe in the making: the real possibility that the kind of journalism that gave rise to -- and preserves -- our democracy will disappear.

The Defender: How the Legendary Black Newspaper Changed America

How to Measure Anything in Cybersecurity Risk