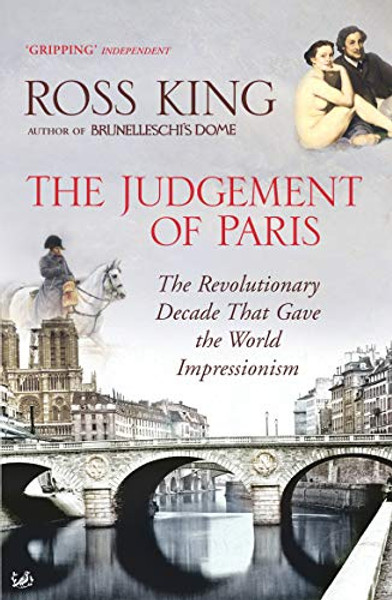 The fascinating new book by the author of Brunelleschis Dome and Michelangelo and the Popes Ceiling: a saga of artistic rivalry and cultural upheaval in the decade leading to the birth of Impressionism.

If there were two men who were absolutely central to artistic life in France in the second half of the nineteenth century, they were Edouard Manet and Ernest Meissonier. While the former has been labelled the Father of Impressionism and is today a household name, the latter has sunk into obscurity. It is difficult now to believe that in 1864, when this story begins, it was Meissonier who was considered the greatest French artist alive and who received astronomical sums for his work, while Manet was derided for his messy paintings of ordinary people and had great difficulty getting any of his work accepted at the all-important annual Paris Salon.

Manet and Meissonier were the Mozart and Salieri of their day, one a dangerous challenge to the establishment, the other beloved by rulers and the public alike for his painstakingly meticulous oil paintings of historical subjects. Out of the fascinating story of their parallel careers, Ross King creates a lens through which to view the political tensions that dogged Louis-Napoleon during the Second Empire, his ignominious downfall, and the bloody Paris Commune of 1871. At the same time, King paints a wonderfully detailed and vivid portrait of life in an era of radical social change: on the streets of Paris, at the new seaside resorts of Boulogne and Trouville, and at the race courses and picnic spots where the new bourgeoisie relaxed. When Manet painted Dejeuner sur lherbe or Olympia, he shocked not only with his casual brushstrokes (described by some as applied by a floor mop) but with his subject matter: top-hatted white-collar workers (and their mistresses) were not considered suitable subjects for Art. Ross King shows how, benign as they might seem today, these paintings changed the course of history. The struggle between Meissonier and Manet to see their paintings achieve pride of place at the Salon was not just about artistic competitiveness, it was about how to see the world.

Full of fantastic tidbits of information (such as the use of carrier pigeons and hot-air balloons during the siege of Paris), and a colourful cast of characters that includes Baudelaire, Courbet, and Zola, with walk-on parts for Monet, Renoir, Degas, and Cezanne, The Judgment of Paris casts new light on the birth of Impressionism and takes us to the heart of a time in which the modern French identity was being forged.

The Judgement of the Eye

The Judgement of Strangers (The Roth Trilogy)