Hundred Days: The End Of The Great War 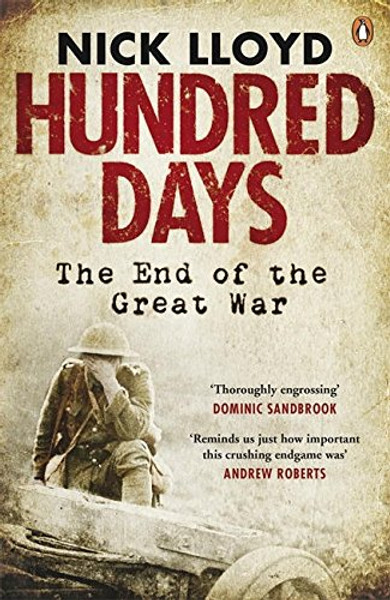 Hundred Days: The End Of The Great War

Nick Lloyd's Hundred Days: The End of the Great War explores the brutal, heroic and extraordinary final days of the First World War. On the eleventh hour of the eleventh day in November 1918, the guns of the Western Front fell silent. The Armistice, which brought the Great War to an end, marked a seminal moment in modern European and World history. Yet the story of how the war ended remains little-known. In this compelling and ground-breaking new study, Nick Lloyd examines the last days of the war and asks the question: how did it end? Beginning at the heralded turning-point on the Marne in July 1918,Hundred Days traces the epic story of the next four months, which included some of the bloodiest battles of the war. Using unpublished archive material from five countries, this new account reveals how the Allies - British, French, American and Commonwealth - managed to beat the German Army, by now crippled by indiscipline and ravaged by influenza, and force her leaders to seek peace. 'This is a powerful and moving book by a rising military historian. Lloyd's depiction of the great battles of July-November provides compelling evidence of the scale of the Allies' victories and the bitter reality of German defeat' Gary Sheffield (Professor of War Studies) 'Lloyd enters the upper tier of Great War historians with this admirable account of the war's final campaign' Publishers Weekly Nick Lloyd is Senior Lecturer in Defence Studies at King's College London, based at the Joint Services Command & Staff College in Shrivenham, Oxfordshire. He specialises in British military and imperial history in the era of the Great War and is the author of two books, Loos 1915 (2006), and The Amritsar Massacre: The Untold Story of One Fateful Day (2011).

A Great and Glorious Adventure: A History of the Hundred Years War and the Birth of Renaissance England

Words Under the Words: Selected Poems (A Far Corner Book)

Concordance to the Septuagint: Three Volumes in Two