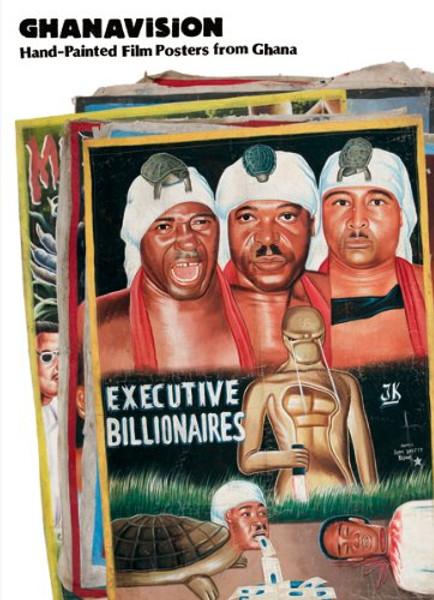 Against today's copyrighted-to-the-gills Hollywood movie industry, the wacky world of Ghanian movie posters comes as a joyous relief, with its absolute lack of respect for not only the directors and even stars of Hollywood, but especially the official iconography that accompanies such films. With the arrival of the video cassette in West Africa in the 1980s, a type of mobile movie house was born, typically consisting of a TV, a VCR, an electrical generator and a car, sometimes presenting blockbusters, sometimes underrated and nearly-forgotten movies, most of them Hollywood-produced. To promote these screenings, artists were commissioned to handpaint posters, often with only a few stills to guide them as to the movie's subject, and with a completely free hand as to the posters' content--they were at liberty to add or change scenes, toss in a few mutant monsters, anything to catch the prospective customer's eye. By applying this basic rule of packaging, artists created bizarre images in which monsters mixed with naked women and superheroes, pitched against naively painted and weirdly proportioned African landscapes. Sadly, this window of copyright-free anarchy lasted only a short time, and by the end of the 1990s the mobile cinema business had declined as television became more widely available in Ghana. Proof that naked mutant superhero monsters are always where it's at, this wonderfully illustrated volume commemorates a glorious moment in popular art.

Murder and Politics in Colonial Ghana

The Films of Stephen King: From Carrie to Secret Window

The Art of Noir: The Posters and Graphics from the Classic Era of Film Noir