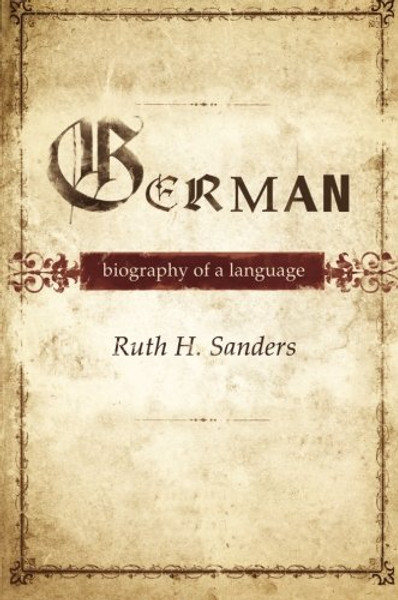 Thousands of years ago, seafront clans in Denmark began speaking the earliest form of Germanic language--the first of six signal events that Ruth Sanders highlights in this marvelous history of the German language.

Blending linguistic, anthropological, and historical research, Sanders presents a brilliant biography of the language as it evolved across the millennia. She sheds light on the influence of such events as the bloody three-day Battle of Kalkriese, which permanently halted the incursion of both the Romans and the Latin language into northern Europe, and the publication of Martin Luther's German Bible translation, a People's Bible which in effect forged from a dozen spoken dialects a single German language. The narrative ranges through the turbulent Middle Ages, the spread of the printing press, the formation of the nineteenth-century German Empire which united the German-speaking territories north of the Alps, and Germany's twentieth-century military and cultural horrors. The book also covers topics such as the Gothic language (now extinct), the vast expansion of Germanic tribes during the Roman era, the role of the Vikings in spreading the Norse language, the branching off of Yiddish, the lasting impact of the Thirty Years War on the German psyche, the revolution of 1848, and much more.

Ranging from prehistoric times to modern, post-war Germany, this engaging volume offers a fascinating account of the evolution of a major European language as well as a unique look at the history of the German people. It will appeal to everyone interested in German language, culture, or history.

German: How to Speak and Write It (Dover Dual Language German)

A Biography of the English Language