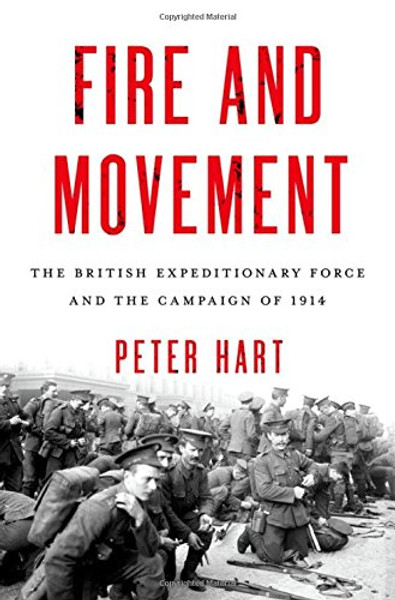 The dramatic opening weeks of the Great War passed into legend long before the conflict ended. The British Expeditionary Force fought a mesmerizing campaign, outnumbered and outflanked but courageous and skillful, holding the line against impossible odds, sacrificing themselves to stop the last great German offensive of 1914. A remarkable story of high hopes and crushing disappointment, the campaign contains moments of sheer horror and nerve-shattering excitement; pathos and comic relief; occasional cowardice and much selfless courage--all culminating in the climax of the First Battle of Ypres.

And yet, as Peter Hart shows in this gripping and revisionary look at the war's first year, for too long the British part in the 1914 campaigns has been veiled in layers of self-congratulatory myth: a tale of poor unprepared Britain, reliant on the peerless class of her regular soldiers to bolster the rabble of the unreliable French Army and defeat the teeming hordes of German troops. But the reality of those early months is in fact far more complex--and ultimately, Hart argues, far more powerful than the standard triumphalist narrative.

Fire and Movement places the British role in 1914 into a proper historical context, incorporating the personal experiences of the men who were present on the front lines. The British regulars were indeed skillful soldiers, but as Hart reveals, they also lacked practice in many of the required disciplines of modern warfare, and the inexperience of officers led to severe mistakes. Hart also provides a more accurate portrait of the German Army they faced--not the caricature of hordes of automatons, but the reality of a well-trained and superlatively equipped force that outfought the BEF in the early battles--and allows readers to come to a full appreciation of the role of the French Army, without whom the Marne never would have been won.

Ultimately Fire and Movement shows the story of the 1914 campaigns to be an epic tale, and one which needs no embellishment. Through the voices and recollections of the soldiers who were there, Hart strips away the myth to offer a clear-eyed account of the remarkable early days of the Great War.

The BEF Campaign on the Aisne 1914: In the Company of Ghosts