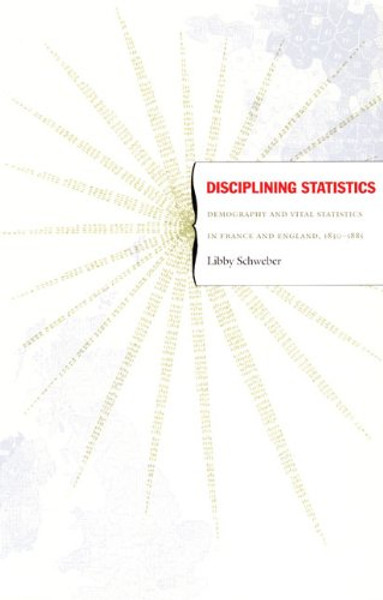 In Disciplining Statistics Libby Schweber compares the science of population statistics in England and France during the nineteenth century, demonstrating radical differences in the interpretation and use of statistical knowledge. Through a comparison of vital statistics and demography, Schweber describes how the English government embraced statistics, using probabilistic interpretations of statistical data to analyze issues related to poverty and public health. The French were far less enthusiastic. Political and scientific lites in France struggled with the reality of statistical populations, wrestling with concerns about the accuracy of figures that aggregated heterogeneous groups such as the rich and poor and rejecting probabilistic interpretations.

Tracing the introduction and promotion of vital statistics and demography, Schweber identifies the institutional conditions that account for the contrasting styles of reasoning. She shows that the different reactions to statistics stemmed from different criteria for what counted as scientific knowledge. The French wanted certain knowledge, a one-to-one correspondence between observations and numbers. The English adopted an instrumental approach, using the numbers to influence public opinion and evaluate and justify legislation.

Schweber recounts numerous attempts by vital statisticians and demographers to have their work recognized as legitimate scientific pursuits. While the British scientists had greater access to government policy makers, and were able to influence policy in a way that their French counterparts were not, ultimately neither the vital statisticians nor the demographers were able to institutionalize their endeavors. By 1885, both fields had been superseded by new forms of knowledge. Disciplining Statistics highlights how the development of scientific knowledge was shaped by interrelated epistemological, political, and institutional considerations.