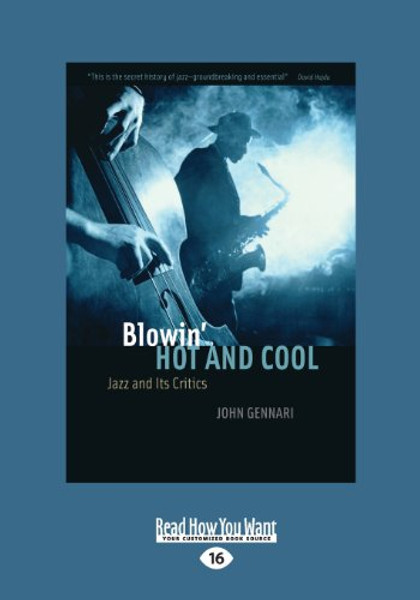 In the illustrious and richly documented history of American jazz, no figure has been more controversial than the jazz critic. Jazz critics can be revered or reviled often both but they should not be ignored. And while the tradition of jazz has been covered from seemingly every angle, nobody has ever turned the pen back on itself to chronicle the many writers who have helped define how we listen to and how we understand jazz. That is, of course, until now. In Blowin' Hot and Cool, John Gennari provides a definitive history of jazz criticism from the 1920s to the present. The music itself is prominent in his account, as are the musicians from Louis Armstrong and Duke Ellington to Charlie Parker, John Coltrane, Roscoe Mitchell, and beyond. But the work takes its shape from fascinating stories of the tradition's key critics Leonard Feather, Martin Williams, Whitney Balliett, Dan Morgenstern, Gary Giddins, and Stanley Crouch, among many others. Gennari is the first to show the many ways these critics have mediated the relationship between the musicians and the audience not merely as writers, but in many cases as producers, broadcasters, concert organizers, and public intellectuals as well. For Gennari, the jazz tradition is not so much a collection of recordings and performances as it is a rancorous debate and the dissonant noise clamoring in response to the sounds of jazz. Against the backdrop of racial strife, class and gender issues, war, and protest that has defined the past seventy - five years in America, Blowin' Hot and Cool brings to the fore jazz's most vital critics and the role they have played not only in defining the history of jazz but also in shaping jazz's significance in American culture and life.

The Third Way and its Critics

H+/-: Transhumanism and Its Critics

Neorealism and Its Critics

Communitarianism and Its Critics

Utilitarianism and Its Critics (Philosophical Topics)