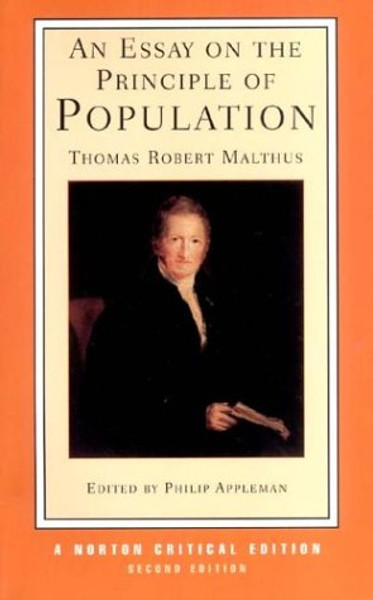 While millions face hunger, malnutrition, and starvation, the worlds population is increasing by over 225,000 people per day, 80 million per year.

In many countries, supplies of food and water are inadequate to support the population, so the world falls deeper and deeper into what economists call the Malthusian trap, named for the writer whose work, more than any other, brought attention to the population dilemma. Philip Applemans comprehensive introduction to Thomas Robert Malthus seminal 1798 work traces the evolution of Malthus idea and its validity through following generations.

The text is accompanied by explanatory annotations and excerpts from the revised edition (1803). Key eighteenth-century influences on Malthus are reprinted, including one by Benjamin Franklin.

Nine major assessments from the nineteenth century are reprinted, includingnew to the Second Editionthose of Frances Pace and Harriet Martineau.

Contemporary commentary ranges widely through many schools of thought, from Lester R. Brown, Paul and Anne Ehrlich, and Garrett Hardin to Julian Simon and Pope Paul VI. All but one of the twenty-four selections are new to the Second Edition.

The Red and the Black (Second Edition) (Norton Critical Editions)