American Spring: Lexington, Concord, and the Road to Revolution 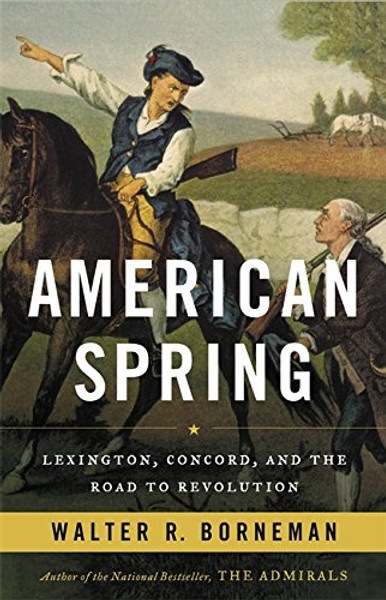 American Spring: Lexington, Concord, and the Road to Revolution

A vibrant new look at the American Revolution's first months, from the author of the bestseller The Admirals When we reflect on our nation's history, the American Revolution can feel almost like a foregone conclusion. In reality, the first weeks and months of 1775 were very tenuous, and a fractured and ragtag group of colonial militias had to coalesce rapidly to have even the slimmest chance of toppling the mighty British Army.

AMERICAN SPRING follows a fledgling nation from Paul Revere's little-known ride of December 1774 and the first shots fired on Lexington Green through the catastrophic Battle of Bunker Hill, culminating with a Virginian named George Washington taking command of colonial forces on July 3, 1775.

Focusing on the colorful heroes John Hancock, Samuel Adams, Mercy Otis Warren, Benjamin Franklin, and Patrick Henry, and the ordinary Americans caught up in the revolution, Walter R. Borneman uses newly available sources and research to tell the story of how a decade of discontent erupted into an armed rebellion that forged our nation.

A Struggle for Power: The American Revolution

John Laurens and the American Revolution

Braddock's Defeat: The Battle of the Monongahela and the Road to Revolution (Pivotal Moments in American History)

The Road to Guilford Courthouse: The American Revolution in the Carolinas