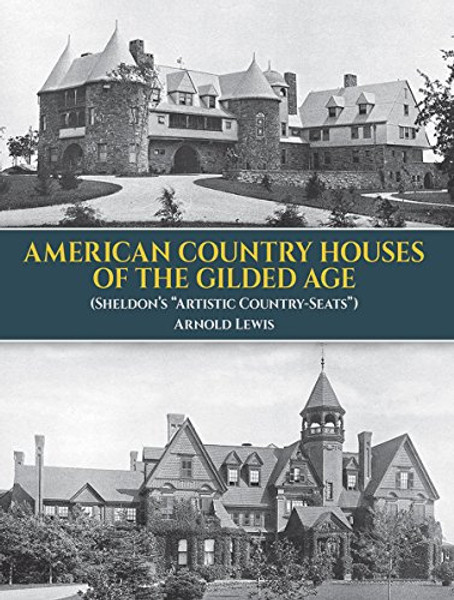 The Gilded Age, the three decades following the Civil War, were years of astounding economic growth. Vast empires in oil, shipping, mining, banking, lumber, transportation, and related industries were formed. It was an era in which fortunes were made and lost quickly, almost easily; a period that encouraged nearly demanded the public display of this newly acquired wealth, power, and prestige. It was during these heady, turbulent years that a new type of domestic architecture first appeared on the American landscape. Called the country seat or cottage, these houses were grandiose in scale imposing facades complemented by manicured gardens, with exceptionally large and impressive reception rooms, halls, parlors, dining rooms, and other public areas. Intended exclusively for the very well-to-do, these buildings were designed by some of the finest and most influential architectural firms in America: McKim, Mead & White; Bruce Price; Peabody & Stearns; Theophilus P. Chandler, Jr.; Lamb & Rich; Wilcox & Johnston; and many others.
The first, best, and most exquisite documentation of this surge of architectural creativity was the 188687 publication of George William Sheldon's Artistic Country-Seats: Types of Recent American Villa and Cottage Architecture with Instances of Country-Club Houses.It presented exceedingly fine photographs, clearly detailed plans and elevations, as well asSheldon's own commentary for a total of 97 buildings (93 houses and 4 casinos). Most structureswere located in new England and the Middle Atlantic states, and embraced the full spectrum of architectural and artistic expressions. This present volume reproduces all of Sheldon's fascinating and historically important photographs and plans, and adds a new, thoroughly accurate text by Arnold Lewis (Professor of Art, the College of Wooster, Wooster, Ohio) that includes the most useful information supplied by Sheldon and also reports on the present condition of each house or casino, providing analyses of elevations and plans, observations about family life in the 1880s, and brief biographical comments about the clients and architects.
Sheldon's photographs connect us with a time and style of living that today increasingly seem more the realm of fiction than fact. Yet, in the pages of this important collection, they are brought fresh to life as they appeared when they were new and times were very different.