American Ballads: The Photographs of Marty Stuart (A Frist Center for the Visual Arts Title) 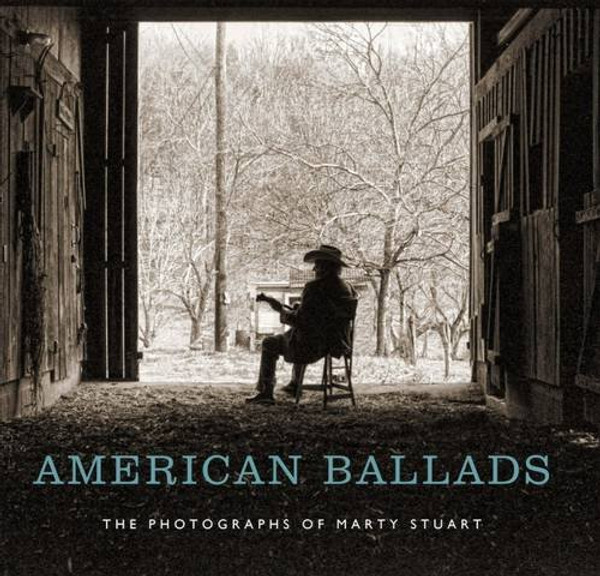 American Ballads: The Photographs of Marty Stuart (A Frist Center for the Visual Arts Title)

Although known primarily as a country music star, Marty Stuart has been taking photographs of the people and places surrounding him since he first went on tour with bluegrass performer Lester Flatt at age twelve. His inspirations to do this include his own mother, Hilda Stuart, whom he watched document their family's everyday life in Mississippi, bassist Milt Hinton's photographs of fellow jazz artists, and Edward Curtis's well-known images of Native Americans at the turn of the twentieth century. Stuart's work ranges from intimate and often candid behind-the-scenes depictions of legendary musicians, to images that capture the eccentricities of characters from the back roads of America, to dignified portraits of members of the impoverished Lakota tribe in South Dakota, a people he was introduced to through his former father-in-law, Johnny Cash. Whatever the subject, Stuart is able to sensitively tease out something unexpected or hidden beneath the surface through a skillful awareness of timing and composition as well as a unique relationship with many of the subjects based on years of friendship and trust.

This book will present images from these three bodies of work: Badlands, on his time with the Lakota; The Masters, from his work with musicians like Bill Monroe, Johnny Cash, Ray Charles, Dolly Parton, George Jones, Kitty Wells, Willie Nelson, and Waylon Jennings; and Blue Line Hot Shots. As Stuart explains, The newly built Interstate Highway System was at one time represented on our maps by the color red, while the two-lane highways and back roads of the nation were represented in blue. The back roads are where you'll find some of the people that I admire, respect, and always keep an eye out for. ... They are renegades As Roger Miller once said, 'These people flush to the beat of a different plumber.'

The photographs are framed by an introduction by Stuart and a context-setting essay by photography historian Susan Edwards, executive director of the First Center for the Visual Arts. The book and accompanying exhibition at the First Center demonstrate that Marty Stuart is a master storyteller not only through his songs but also through his revealing and compelling photographs.

Excerpt
When I first began traveling I loved the adventure of going from town to town and exploring what each place had to offer. Whenever possible, on the day of the show I walked the streets and back roads, gathering stories and songs from local folks. I studied everything from the different kinds of architecture that surrounded me to the majesty of the sunsets and how they affected the mood of the town I was in. That first season was filled with the joy of a new musical life taking flight. The applause, the spotlight, the sparkle of the fame, the freedom of 'here today, go somewhere else tomorrow' charmed me night after night, day after day, until show business found its mark and became a way of life. I enjoyed every minute of the dance. I still love those things, but most of all it's the people that I've enjoyed along the way, namely the characters. The kind of characters who can be defined as American originals.
--from the Introduction by Marty Stuart

The Photograph (Oxford History of Art)

Writing for the Visual Arts

The Photograph as Contemporary Art (World of Art)