Act of Congress: How America's Essential Institution Works, and How It Doesn't 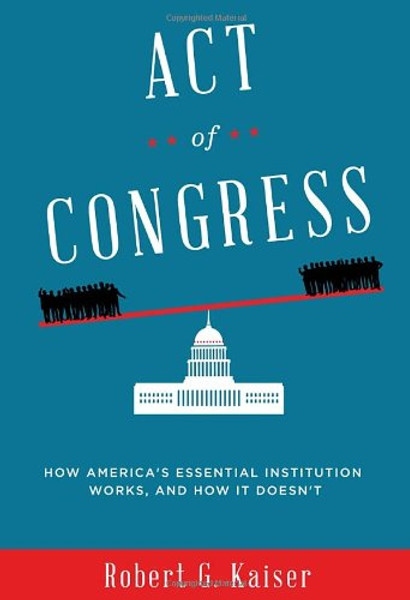 Act of Congress: How America's Essential Institution Works, and How It Doesn't

An eye-opening account of how Congress today really worksand doesntthat follows the dramatic journey of the sweeping financial reform bill enacted in response to the Great Crash of 2008.

The founding fathers expected Congress to be the most important branch of government and gave it the most power. When Congress is brokenas its justifiably dismal approval ratings suggestso is our democracy. Here, Robert G. Kaiser, whose long and distinguished career at The Washington Post has made him as keen and knowledgeable an observer of Congress as we have, takes us behind the sound bites to expose the protocols, players, and politics of the House and Senaterevealing both the triumphs of the system and (more often) its fundamental flaws.

Act of Congress tells the story of the Dodd-Frank Act, named for the two men who made it possible: Congressman Barney Frank, brilliant and sometimes abrasive, who mastered the details of financial reform, and Senator Chris Dodd, who worked patiently for months to fulfill his vision of a Senate that could still work on a bipartisan basis. Both Frank and Dodd collaborated with Kaiser throughout their legislative efforts and allowed their staffs to share every step of the drafting and deal making that produced the 1,500-page law that transformed Americas financial sector.

Kaiser explains how lobbying affects a billor fails to. We follow staff members more influential than most senators and congressmen. We see how Congress members protect their own turf, often without regard for what might best serve the countrymore eager to court television cameras than legislate on complicated issues about which many of them remain ignorant. Kaiser shows how ferocious partisanship regularly overwhelms all other considerations, though occasionally individual integrity prevails.
Act of Congress, as entertaining as it is enlightening, is an indispensable guide to a vital piece of our political system desperately in need of reform.

How Baking Works: And What to Do When It Doesn't

How the Immune System Works (The How it Works Series)

Grammar to Go: How It Works and How To Use It

How the Immune System Works (Blackwell's How It Works)

How Wikipedia Works: And How You Can Be a Part of It