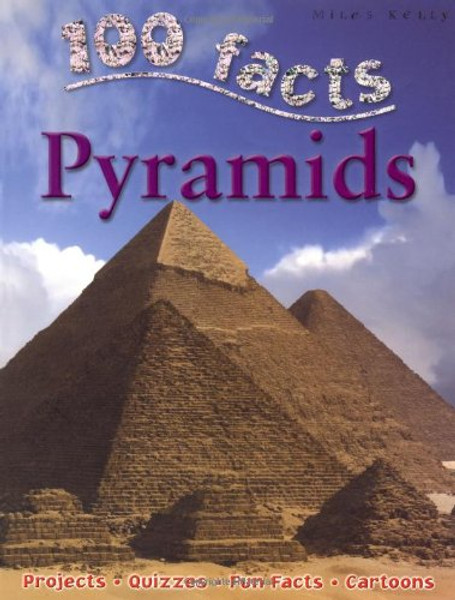 100 Facts Pyramids is bursting with unbelievable images, amazing activities and exactly 100 facts for kids aged 7+. Children will soon learn everything they need to know about these magnificent ancient structures. Kids learn more easily with bite-sized information. Photographs and artworks aid children who learn through visual prompts. Activities allow children to put what they have learned into practice. 100 Facts Pyramids contains key topics about these architectural masterpieces in simple numbered facts. Every page features fantastic illustrations and photographs that support a child's understanding of the text. Essential topics covered in 100 Facts Pyramids: The building of the famous Pyramids of Giza in Egypt Mayan and Aztec pyramids and what they were for Modern interpretations of structures around the world Examples of 'I don't believe it' fascinating facts: If you could talk to an ancient Egyptian, he wouldn't know what a pyramid was! In his language a pyramid was a 'mr' (say: 'mer'), and pyramids were 'mrw' (say: 'meroo'). Pyramids were built with narrow shafts that pointed to the stars. The Egyptians believed that a pharaoh's soul used these shafts to travel between the world of the living and the afterlife Napoleon worked out that the three Pyramids of Giza contained enough stone to build a wall around France 3 centimetres wide and 3.7 metres high! Activities to make learning accessible and interactive include: Quiz question: What is the high, open space inside the Great Pyramid called? Make a mosaic with colored paper cut into small squares, plain paper, a pencil and glue. Draw a design on plain paper and fill it in with the colored pieces Use books or the Internet to find examples of beautiful Egyptian paintings on burial chamber walls

The Big Questions: A Short Introduction to Philosophy (with Source CD-ROM)